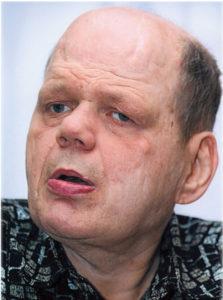 1948 ~ 2016
Mr. Monty Hollar, beloved resident of the Alfred Egan Home in Bow Island, passed away at the Medicine Hat Regional Hospital on Friday, August 12, 2016, at the age of 68, with a caring Alfred Egan Home staff member by his side. Monty was born on April 30, 1948, in Mannville, Alberta. He was predeceased by his father Claude Hollar. Monty lived at the Michener Centre in Red Deer from August 1953, until he moved to Bow Island on April 11, 1994. He adjusted to his new home in Bow Island quickly. Monty had the opportunity to live in Community Living for several years, a home across the road from Alfred Egan Home, where he lived with two other individuals. Monty was a quiet, unassuming man who may not have spoken verbally yet communicated with facial expressions, grunts, smiles and laughs. He loved to relax in his recliner most afternoons, curling up comfortably with his legs tucked up. Monty loved his swimming excursions and the lunch out afterwards! Monty enjoyed sports – both on the TV and in person. He especially enjoyed watching hockey. One of the highlights of his life was a Mexican Cruise with two other individuals and three staff in 2005. Monty will be missed by the staff and friends whom he came to know as his family at Alfred Egan Home. A Celebration of Monty’s life will be held at the Alfred Egan Home, 941 – 1st Street East, Bow Island on Friday, August 19, at 2:00 p.m. with Life Celebrant Gerry Getz officiating. Interment will follow at the Bow Island Cemetery. (Condolences may be expressed by visiting our website at www.cooksouthland.com) Honoured to serve the family is