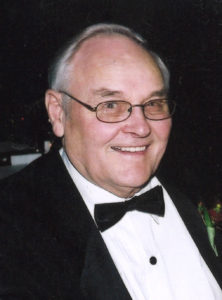 Tony Roth
1928 – 2016
Anthony Thomas Roth, beloved husband of Kathleen Roth, passed away in Lethbridge, with family by his side, on Monday, August 15, 2016 at the age of 88 years.
Relatives and friends are invited to Prayers at Assumption Catholic Church, 2405 – 12 Avenue South, Lethbridge on Friday, August 19, 2016 at 7:00 P.M.
The Funeral Mass will be celebrated at St. Michael’s Catholic Church, 1113 – 1 Street East, Bow Island on Saturday, August 20, 2016 at 11:00 A.M. Burial to follow at the Bow Island Cemetery. Condolences may be forwarded by visiting our website at www.southlandfuneral.com.
A dear husband, dad, grandpa “Gramps”, great grandpa, uncle and brother, Tony will be lovingly remembered by his wife Kay and their children Alan (Janet) Roth of Calgary, Loreen (Len) Mezei of Medicine Hat, Gerry (Rhonda) Roth of Lethbridge and Patti (Bill) Kaye of Coaldale; grandchildren Jeffrey Hamilton (Monica), Kristin Doherty (Darren), Amy (Rob) Burton, Stephanie (Jonathan) Beekman, Jennifer (Chris) Harris, Christina Kaye (Kyle), Jessica Roth (Nathan), Eric (Alisha) Mezei, Aaron Kaye, Anthony Gibson (Marina), Anja Roth, and eleven great grandchildren. He will be fondly remembered by his sister Isabelle Allen, sisters-in-law Jeanne Roth, Anne Roth and by numerous nieces and nephews.
He was predeceased by his birth mother Anna Roth (nee Schlachter), father Joseph Roth and stepmother Barbara Roth (nee Hertz); brothers George Roth, Jim Roth and Frank Roth; sister Dorothy Rapson and brothers-in-law Wilf Rapson and Dwayne Allen.
Tony was born in Medicine Hat on January 9, 1928. He married his sweetheart Kathleen Simpson on July 6, 1953. Tony and Kay, supported by their children, enjoyed immense good fortune as a family, having been married for sixty three years.
Tony and Kay loved to visit with relatives and friends, go camping and just have people over, with everyone contributing to the stories and memories about lives and times. They were a great couple and just happy to be with each other, wherever “there” might be.
Much of what Tony found precious in life he saw through the eyes of his children, his grandchildren and his great grandchildren, and he shared a deep bond with every one of them. He had many gifts and a heart of gold, but above all he cared about kids, identified with them and always had their best interests at heart. In him, they recognized a friend; a friend to rely on, to create a secret handshake with, to fix a broken toy, to let them win a game, to bandaid a scrape and when they were older, to teach them how to drive. Tony’s sense of humour kept them entertained while he taught them to paint fences, fish, shoot, garage-sale or a hundred other such vital life skills and most of all, to become upstanding adults. He was “Grandfather” personified. Every one of them, his children included, loved “Gramps” more than anything.
Tony farmed in the Bow Island area for thirty five years before his retirement in 1992. As a farmer, he excelled in invention and creativity with crescent wrench, electric arc welder or acetylene torch in hand, joking how agriculture seemed to have more to do with fixing equipment than with horticulture.
He was also a talented painter and sculptor, creating many pieces of art throughout his lifetime. A man of quiet, solid faith in the Roman Catholic faith, Tony was extremely proud of achieving 4th degree Knighthood with The Knights of Columbus in 1996. He also received the “Melvin Jones Fellow Award” for Humanitarian Services with Lions Club International. He was also a member of the St. Michael’s School board for seventeen years.
Tony had a special connection with his surrogate brothers and sisters of the George and Agnes Roth family as they helped raise him and his brothers Jim and George after the passing of his mother at a young age. In his mind, they were his brothers and sisters. Tony and Kay moved to Lethbridge in 1996 where he resided until his passing.
If friends so desire, memorial tributes in Tony’s name may be made directly to the Alzheimer Society, 740 – 4 Avenue South, Lethbridge, Alberta T1J 0N9 (www.alzheimer.ca).
Arrangements in care of Southland Funeral Chapel, Taber. Telephone: (403) 223-8778.