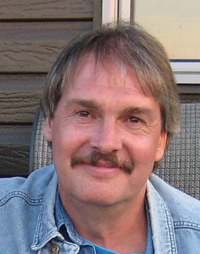 It is with broken heart and profound sorrow that I announce the passing of my husband Bob, love of my life, at the young age of 63. Bob passed peacefully where he wanted to be, at home, in his bed in my arms.

Bob leaves to mourn his passing the great love of his life, his best friend and wife Catherine McCulloch-Rock, his loving adult step children Margaret (Robin) Simon, Jean (Chuck) McCulloch and his twin grandchildren Hayden & Rylan McCulloch both of whom he held in his arms on the day they were born and they loved him dearly. He also leaves his brother in-law, Peter Connelly and family of Med Hat.

Bob also leaves his siblings Janice Jorgenson and family of BC, Patricia (Brian) Austin and family of Med. Hat & BC, Brian (Chris) Rock and family of PA, as well as a large extended family in SK. Bob was predeceased by his father George in 1993 and his devoted mother Claire in 2013.

Bob was proud of his Metis heritage and was a member of both Sask. & Alberta Metis Associations.

Born in Prince Albert SK. Bob worked at the local TV/Radio station as a very young man (writing and producing commercials, studio work, camera, lighting, switching, editing). He saved every penny he could and departed PA for foreign shores. He did this three times and travelled to 60 countries in 6 years. While on his journeys abroad he worked in advertising and the media briefly in Australia. Upon his first trip home he enrolled in photography at Grant McEwan College in Edmonton, and later worked as a photographer/career counsellor for Advanced Education and Manpower, and; the City of Edmonton as the Audio/Visual Supervisor. Upon his last return home (in 1984) he enrolled at Lethbridge University and attained his BA in Geography. He followed up with a Master’s Degree in Cultural Geography from Queen’s University, Kingston, ON; all obtained on scholarships. Bob was employed in a variety of positions to name but a few – he worked in Vermilion, AB, writing program courses and creating a Student Scientific Dictionary at the Alberta Fire Training School (Lakeland College), and as Arts Curator (creating their promotional videos, and literature) at the Duck Lake Museum in Duck Lake, SK.

Bob then decided to put all of his education, skills and talents to better use. He became a playwright and the creator, writer, producer of plays and documentary videos. Several of his documentaries won awards and were highlighted on national TV for several years. Namely “The Missing Bell of Batoche”, “Vikings to Metis” and “Mandela’s Sash” – this was the true story about Metis Senator, John (JB) Boucher’s travel to Ottawa, for a meeting with Nelson Mandela, where he tied a Metis Sash around his waist. Mr. Mandela wore his sash all day, even as he addressed our anadian parliament. The story was a great tribute to Metis historical education and Senator Boucher later received the prestigious Order of Canada for his efforts on behalf of all Metis people.

Bob wrote and created “Petite Marie”, an animated program that has huge potential for educating children about Metis heritage at home and globally. His program could easily be expanded to include all other cultures to educate children about the diversity in the world and in their native Canada. Bob’s next challenge was as a Faculty Program Manager at the First Nations University in PA. SK, where he taught University level Geography courses, as well as overseeing the satellite programs for the university in remote areas of Saskatchewan.

Having met briefly a couple of times in earlier years, we reconnected with each other in 2007. It was as if the planets aligned and we became inseparable and Bob moved to Medicine Hat. Destiny was fulfilled, we were both in the perfect place of love and respect for two people to be together. We marvelled at each other’s life experiences. Nothing we did before gave us as much happiness as being together did. We were madly in love and spent every possible moment together. We watched movies, comedies and hockey, we took long walks together, we listened to music together, we laughed and laughed and oh how we danced. We loved passionately and wrote love notes to each other and Bob wrote love poems to me. I was his Ayla and he was my Jondalar. Our love for each other grew stronger and more intense with each passing day. When Bob was asked if he had any regrets in life he said, just one, “I wish I could have found Catherine sooner”.

Bob was a wonderful human being, a man of great integrity, well-educated, well-read, well-travelled, well-spoken, an interesting conversationalist and a kind, thoughtful and considerate man. An unforgettable man, whose love I will cherish forever. Bob lived a very full life and walked some of the way with many people on parts of his journeys – some brought joy when they came and most brought joy when they left.

Thanks to Dr’s. Durand and Weigel for their excellent care of Bob. Cremation has taken place and at Bob’s request there will be no formal service.

Funeral arrangements are entrusted to SAAMIS MEMORIAL FUNERAL CHAPEL CREMATORIUM & RECEPTION CENTRE, “The Chapel in the Park”, locally owned and directed. Should you wish any additional information, please telephone (403)528-2599