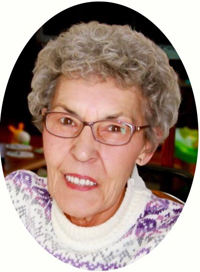 It is with great sadness that we announce the passing of Eleanor Howlett on August 6, 2016 at the Crowsnest Pass Health Centre in Blairmore, AB. She was 83 years of age.

Eleanor was born in Liebenthal, SK on March 11, 1933 to loving parents, Louis and Theresa Folk. She learned the value of family, hard work and compromise while living on the family farm with her twelve siblings. At the age of 18, Eleanor moved to Ralston, AB to work in the Canteen for the Department of National Defense. She blossomed into an intelligent, beautiful young woman who captured the attention of a handsome gentleman, Earl Howlett. They soon fell in love, and on May 23, 1953 they were joined in marriage. The happy couple lived in Ralston for many years and were blessed with a wonderful family of their own before moving to Redcliff, AB in 1976. Eleanor took time off from working at the base to raise their four children. During this time, she spent many years as “Ralston’s Avon Lady”. Once all of their children had settled in school, she returned to work at the Canadian Forces base Suffield.

Eleanor and family spent many wonderful weekends camping and exploring Elkwater and the Cypress Hills. If you were ever lucky enough to indulge in Eleanor’s delicious homemade bread or cinnamon buns, you would know why she was dubbed one of Ralston’s Best Bakers! Her dedication to the community was evident in her involvement for many years as a Brownie and Girl Guide leader in Ralston and later with the Royal Canadian Legion & Ladies’ Auxiliary Branch #6 in Redcliff, AB.

Eleanor enjoyed crossword puzzles, crafts, and spent many happy hours playing cards with her children, grandchildren and friends. She threw many a dart in her years playing in the Legion League, and was an avid bowler and continued with her bowling league late into her 70s. More than anything, Eleanor loved spending time with her precious family and friends, and she was never more content than when with them. She loved unconditionally and her kindness and generosity of spirit will be forever remembered.

Left to mourn her passing and celebrate her life is her son, Garnet (Allison) Howlett of Lethbridge, AB; her daughters, Beverly (Claude) Legroulx of Coleman, AB and Dorothy (Andy) Wuestner of Edmonton, AB; her daughter-in-law, Desiree Howlett of Medicine Hat, AB; her eleven grandchildren, Kirby and Kristy Howlett, Jesse (Lindsay) Legroulx, Ryan (Billie-Jo) Legroulx, Dion (Elsa) Legroulx, Danica and Corey Wuestner, Skyla (Jeremy) Howlett-Deck Marissa Howlett, and Emily and Lorin Hansen; her six great grandchildren, Jairo, Jade, Chase, Emmy, Elliana and Evaya; her brother, Edward (Val) Folk of Penticton, BC; her sisters, Kay Denis of Osoyoos, BC; Fran Watson of Winnipeg, MB, Trudy Wagner of Shaunavon, SK and Annette Bleile of Edmonton, AB; her extended family; as well as the many friends she made throughout her life.