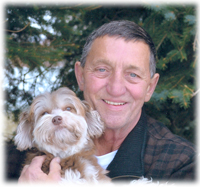 Sadly, the Miller family announce the sudden passing of Douglas Miller on Monday, August 22, 2016, at the age of 67 years. Along with his loving wife, Judy, Doug’s memory will forever remain in the hearts of his daughter, Krista (Mark) Davies; two grandchildren, Zachary and Cameron Miller and their mother, Stephanie (Tyrel) Smith and their son, Dawson. He is also survived by his sister, Sharon (Richard) Ehry and their children, Jason, Chris and Raegan and their families as well as his mother-in-law, Joan Dolman, all of Medicine Hat. Doug also leaves behind many more relatives and very good friends. He was predeceased by his son, Sheldon (2009); parents, Mark (1989) and Tina (2007) as well as his father-in-law, Beevor Dolman (1995). Doug, A.K.A. “Tiger”, was well known in the community for his years of playing fastball with many record breaking achievements. He has since passed on his great love and knowledge of all sports to his children and grandchildren. With some of the highest marks in the Province, Doug breezed through his schooling on his way to achieving his journeyman’s certification as a Pipefitter. He worked at Western Co-op Fertilizer and Goodyear, finishing his career in January of 2008. Doug was a whiz with numbers and math, always teaching his kids and grandkids tricks with numbers, encouraging them to use their heads instead of their calculators. He loved sharing his knowledge with others and teaching about the use of “common sense” (CS). Doug and Judy were married in 1972 and enjoyed everything that life offered, especially children, camping, sports, travelling, family get togethers and the company of good friends. Doug was an advocate of being a good neighbour. In his tight knit community, he was always checking on houses, cutting grass, shovelling snow and looking after pets while his friends and neighbours were away. He loved to be in his garage, “The Doug & Dog House”, with the TV on sports and the company of his two “girls”, Keebler and Rachel Ray. If any of the neighbours wanted a chat, they knew they’d find him there. In honouring Doug’s wishes, a simple Graveside Service will be held at Hillside Cemetery in Medicine Hat on Monday, August 29, 2016, at 3:00 p.m. with Reverend David Pollard officiating. Those attending are encouraged to gather at Cook Southland Funeral Chapel, 901 – 13 Street S.W., Medicine Hat on Monday between 2:20 p.m. and 2:40 p.m. The procession will depart for Hillside Cemetery at 2:45 p.m. Everyone is welcome and encouraged to please dress casual. (Condolences may be expressed by visiting our website at www.cooksouthland.com) If friends so desire, donations in memory of Doug may be made to the Heart & Stroke Foundation of Alberta, 124, 430 – 6 Avenue S.E., Medicine Hat, Alberta, T1A 2S8. Honoured to serve the family is