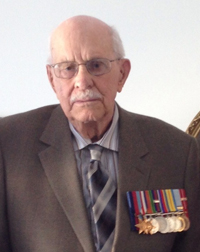 He was born on December 31st, 1924 in Medicine Hat to parents Joe and Agnes Brown McQueen. Gordon was the youngest of three boys, and predeceased by his brothers Jack and Bill.

Gordon grew up in Medicine Hat and attended St. Theresa’s Academy High School.
Gordon had extensive military service on behalf of Canada, which he served with Pride and Distinction.

In his early teens, Gordon joined the South Alberta Regiment, a Militia Unit, during the early stages of World War II. Here he rose to the rank of Sergeant. His father, as Chief of Police, warned him not to lie about his age because he would “find him and bring him back.” When Gordon turned 18 on December 31st, 1942, he joined the regular force as a private. After training in both Canada and England, he landed in France in August of 1944.

Wounded in the heavy fighting near Caen, Northern France, Gordon returned to England to recover and subsequently became an instructor for the infantry. Upon his return to Canada, he took officer training and was commissioned as a Lieutenant. Gordon again volunteered for the Korean War, and served as a Platoon Commander on the front lines. He served for a full year overseas. After Korea, Gordon stayed in the Militia and rose to the rank of Major and was, for a time, the second in command of the South Alberta Light Horse. The family is very proud of his service to Canada.

Upon Gordon’s return from Europe in 1945, he courted Joyce Deason and married her in September of 1947. They made their home in Medicine Hat and raised five children. The family has blossomed into eight grandchildren; James and Michael Gulliver, Ryan and Gordon McQueen, Jill McAuley and Michelle Admiraal, and Jennifer and Jessica Getz. There are ten great grandchildren. All were in attendance at Joyce’s 90th Birthday in June of this year.

Fond memories of camping at Elkwater are shared by the whole family. Tales abound about spending every summer weekend camping, or of the camping road trips that took the family throughout Western Canada and the US in Montana, Wyoming, Idaho, Washington and Oregon.

Gordon worked for Alberta Brewers Agents, and retired in 1985. He then began his passion for golf. He enjoyed playing regularly for many years at the Medicine Hat Golf Club. He especially enjoyed picking up a game when he travelled.

As life long residents of Medicine Hat, Gordon and Joyce were sad to leave their home for Calgary in 2012 but did so to be closer to family.

A special thank you goes out to the care that he received while attending Carewest’s Comprehensive Community Care (C3) day program in Calgary.

As requested by Gordon, a private “Poppy Service” will be held at Hillside Cemetery in Medicine Hat with family.

Donations can be made to the Medicine Hat Legion. Condolences can be left at www.choicememorial.com

We will miss you dearly.