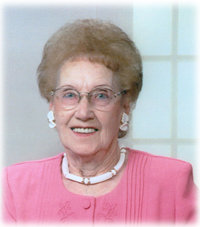 It is with loving hearts that the family of Almeda (Meda) May Paterson announce her peaceful passing at the Medicine Hat Regional Hospital on Saturday, August 27, 2016, at the remarkable age of 101 years. Meda leaves to cherish her memory: son, Wayne (Shirleyann) Wilson; daughters, Dixie (Bob) Black and Penny (Art) Read as well as eleven grandchildren and many great- grandchildren. She was predeceased by her parents, George and Frances (Ma Pat) Paterson; brothers, Jimmy and Roy Paterson; son, Larry Wilson in 1972; grandson, Steven Read in 1975 and great-granddaughter, Kayla Taylor in 1993. Meda was born in Maple Creek, SK. on July 17, 1915. She was raised in the Battle Creek, SK. area and received her schooling at a country school in the Merryflat district. Meda married Lyle Wilson on May 28, 1937, in Maple Creek, SK. After living in Trail, B.C. they came back to the Wilson ranch in 1941 where they raised their four children. They moved to Medicine Hat in 1966. Meda’s family was her pride and joy! She was an inspiration to everyone who knew her. Her outgoing personality and cheerful attitude was admired by all. She loved playing cards with family and her many friends (especially poker) at which she excelled. Meda loved dancing all her life. She travelled extensively and had many adventures and amazing experiences while in her eighties and nineties. To name a few, a hot air balloon ride, trips to China and Portugal, swimming with dolphins in Cuba and parasailing in Mexico. Meda was also honoured at the RCMP Musical Ride held at Fort Walsh in 2015 following her 100th birthday celebration. A Come and Go Celebration of Meda’s wonderful life will be held at the Southside Events Centre, 4 Strachan Court S.E., Medicine Hat on Saturday, September 10, 2016, between 1:00 p.m. and 4:00 p.m. (Condolences may be expressed by visiting our website at www.cooksouthland.com) Honoured to serve the family is