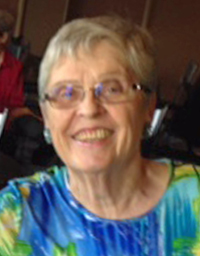 It is with loving hearts that the family of Shirley Mae McKenzie announce her peaceful passing at the Medicine Hat Regional Hospital on Tuesday September 6, 2016 at the age of 80 years. Shirley leaves behind her beloved husband, Bill; her daughters, Mary (George Anderson) and Margaret (David Farran); and four grandchildren, Leigh Farran, Anne Anderson, Reid Anderson and Tom Farran. She will be sadly missed by brother-in-law, Norman (Angele) McKenzie; and many nieces and nephews, including her special niece, Patsy Malasky. Shirley was born in Assiniboia, Saskatchewan on May 15, 1936 and was the only child of United Church minister Enos Montour and his wife Hilda. She lived in various towns in Saskatchewan as a child and spent her teenage years in Hagersville, Ontario before moving to Aneroid, Saskatchewan in 1953. Shirley and Bill were married on December 3, 1954 and spent the next forty years farming, raising their family and contributing to the Saskatchewan communities of Aneroid, Ponteix and Outlook. In 1994, they retired to Medicine Hat and continued to enjoy a busy life of socializing with friends and family, travelling around Canada and the USA, spending time at the family cottage at Cypress Hills and volunteering in the community. Shirley’s love of people and her outgoing personality shone like a beacon to all who knew her. She loved music and spent many happy hours playing piano and singing for others, most recently with her friends Richard and Len as part of the We Three. Shirley’s family was her pride and joy – she adored her grandchildren and loved to organize family reunions and celebrations. A Celebration of Shirley’s Life will be held at SAAMIS MEMORIAL FUNERAL CHAPEL, 1 Dunmore Road SE, on Saturday, September 10, 2016 at 10:00 a.m. with Dr. Shane P. Andrus officiating. In lieu of flowers, memorial donations in Shirley’s name may be made to the Salvation Army, 164 Stratton Way SE, Medicine Hat, Alberta, T1B 3R3 or to the charity of one’s choice. Many thanks to the doctors, nurses and other staff of the Medicine Hat Regional Hospital who cared for Shirley during her illness. Condolences may be sent through www.saamis.com or to condolences@saamis.com subject heading Shirley McKenzie. Funeral arrangements are entrusted to