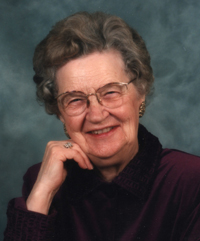 Mrs. Luella “Lue” Averill, beloved wife of the late Mr. Ken Averill, passed away on September 8th, 2016 at the age of 99 years.

Luella was born June 3rd, 1917 to Emil and Cora Kleven at Darmody, Saskatchewan and joyfully eloped July 23rd, 1937 to marry Ken Averill. They were married happily for 62 years. They lived in Saskatchewan until moving to Alberta in 1963.

Luella was an exceptionally devoted school teacher until 1978 with the last 14 years as a Grade 1 and 2 teacher to hundreds of fortunate pupils at Vincent Massey School in Medicine Hat.

‘Lue’lla was a member of Westminster United Church, the UCW, the Murray Chapter #58, Order of Eastern Star, and the Retired Teachers Association of Medicine Hat.

A Memorial Service will be held at SAAMIS MEMORIAL FUNERAL CHAPEL, #1 Dunmore Road SE, on September 16th, 2016 at 1:30 p.m. with Gary Goran officiating.

Memorial gifts in Luella’s memory may be made to the charity of one’s choice. Condolences may be sent through www.saamis.com or to condolences@saamis.com subject heading Luella Averill. Funeral arrangements are entrusted to