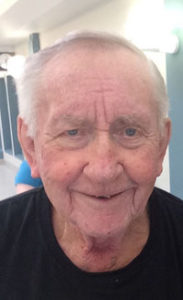 Your wings were ready, but our hearts were not, when God called you home on Thursday, September 1, 2016. Curly spent one anniversary without his love, and on what would have been Mom and Dad’s 55th wedding anniversary, Dad took his last breath and said goodbye to us, but hello again to the love of his life Mary.

Erwin was born December 13, 1933 in Leader, Saskatchewan to Wilhelm and Hulda Ritz. Erwin was the youngest of ten children and joked that the reason he didn’t have a middle name was that they ran out by the time his parents got to him. Erwin was predeceased by the love of his life just 14 short months ago, Mary. Also beating him to heaven were his father Wilhelm, mother Hulda, sisters Emma, brother Albert, sister Rosie, brother Rudolph, sister Hilda, brother Hugo, brother Helmuth, and sister Alice.

After leaving school, Curly took a job with McLeods and traveled all across western Canada.He always had such an outgoing personality he decided to trade in his traveling shoes to start a career as a radio personality for CKDM in Dauphin, Manitoba. It was there, shortly after his arrival, that he met the love of his life and the woman he stayed committed to for 55 years, his wife Mary. Mom and Dad dated only a short while before Dad proposed, and they were married September 1, 1961 in Dauphin, Manitoba. Without wasting time, 10 months later they welcomed their first son Faron Murray Ritz. The young family soon moved on to Portage la Prairie, Manitoba, where Dad worked for CFRY and they had their second son Leon Rae Ritz. Curly then took a position at CKRD radio in Red Deer, Alberta; which saw the family move there in 1966. With the lure of entrepreneurship the family then moved to Medicine Hat in 1970 where Dad and Mom began to run the Mr. Dairy Burger Bar. Shortly after Mom and Dad had their youngest child, a daughter Tamala Michelle Ritz. Curly then also took a position with the local country radio station CHAT, where he took over the morning show. He also began doing the in house announcing for the WCHL Medicine Hat Tigers. Curly went on to work for CHAT radio for 19 years, before moving over to the alternative radio station in Medicine Hat CJCY. As Curly’s children grew and moved out he and Mary decided to move closer to her siblings and father in Kelowna, British Columbia in 1991. They enjoyed their time in the beautiful Okanagan Valley, however after retiring the pull of their grandchildren brought them back to Alberta in 1996. They briefly lived in Calgary, but moved on to Irricana, where they lived until 2015.

Dad had an illustrious career in radio which game him the opportunity to meet most of country music’s biggest artists. He was always happy to share some amazing stories about some country music artist he had met along the way. Dad loved the old time country music and was in a number of bands all throughout his life and was still singing and jamming with friends right up to his passing. Curly was always a community minded man and belonged to the Rotary, Kiwanis and Elks Clubs in Medicine Hat for a number of years. Dad reached the pinnacle status of grand exalted ruler in the Elks Club, and later went on to join the Lions Club when he moved to Irricana. You could always find Curly puttering around fixing something or working in his yard to win the Communities in Bloom contest every year. Dad will be sadly missed and leaves to morn his sons Faron (Oksana), Leon, daughter Tamala; grandchildren Dakota, Sienna, Alex, Zarrah, Caitlin, Ryan, Bex, Cersten, Brayden; great-grandchildren Kaysia; sister Frieda, brothers-in-law Bob (Barb), Cliff (Fran), sister-in-law Dodi (Murdi) and numerous nieces and nephews, cousins and relatives.

Donations can be made in Erwin’s name to the Alberta Cancer Society. A Celebration of Life will be held on Friday, September 16, 2016 at the K I K Hall in Irricana at 2:00pm.