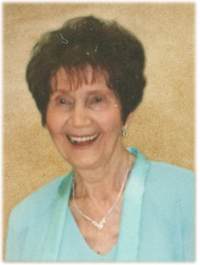 It is with loving hearts that the family of Martha Anderst announce her peaceful passing at the Medicine Hat Regional Hospital on Saturday, September 10, 2016, at the age of 93 years. Martha was born in Medicine Hat on June 23, 1923, a daughter to proud parents, Carl and Carrie Herrmann. She was raised and adopted the values of a hardworking farm girl on the Carl Herrmann Family Farm located south of Schuler. Martha attended the Friedensfeld School and furthered her education at the Christian Training Institute in Edmonton. She met and later married Albert Anderst on July 19, 1946 at Grace Baptist Church in Medicine Hat. They were blessed with six children. As a young girl she developed a deep love for the Lord which she carried throughout her life. Martha was an active member of Friedensfeld Baptist Church while growing up, Hilda Baptist Church from 1946 – 1977 as well as Grace Baptist Church and Hillcrest Evangelical Church in Medicine Hat. She taught Sunday School, served on the Women’s Missionary Fellowship and her voice could be heard singing in the church choirs. Martha was employed as a house cleaner and at the Redcliff Glass Factory during the war years. She was a tireless worker all her life. Family meant everything to her…as a loving mother, grandma and great-grandma, she was a pillar of strength and support for the family. Martha always had a keen interest in the activities of her children and grandchildren and was always there to cheer them on. She had a kind, gentle spirit and warm smile that would light up the room! Martha was a lady who was well liked and offered a valuable gift of friendship to those she met. She had an amazing memory and noted her life by keeping a diary in which she made daily entries for over 50 years! Every occasion, small or great, was memorable to Mom because her love for the Lord and her love for family, friends and people in general. Martha will be dearly remembered by her children, Gloria (Doug) Roth and their family, Marcel (Sherry) Roth – (Jordyn and Eathan) and Jeff; Cliff (Peggy) Anderst and their family, Sharalee (Bruce) Petch – (Austen and Landra), Kimberlee (Phil) Dickau – (Ben and Reese); Carolyn (Cliff) Roth and their family, Morgan (Greg) Rowland – (Drew), Lee and his fiancee, Barbara; Cyril (Linda) Anderst and their family, Jared (Andrea) Anderst – (Eliza, Miriam and Abigail), Peter (Ana) Anderst – (Rocco and Enzo), and David; Janice (Paul) Tee and their family, Lauren (Joel) Billingsley and Maegan Otto; Joanne Otto and her family, Jeremy (Bobbi) – (Brooke-lyn, Brianna, Jordyne, Jaidyne and Hailey), Stephanie – (Courtney). She is also survived by a brother, Rubin (Jean) Herrmann; sisters, Freda (Wally) Kanwischer, Caroline Zeitner and Helen Griscowsky; sister-in-law, Helanda Herman as well as numerous nieces and nephews. She was predeceased by her husband, Albert; parents; grandson, Landon Otto; two brothers, Ted Herman and Edwin Herrmann and a sister, Barbara Sonnenberg. Those wishing to pay their respects may do so at Cook Southland Funeral Chapel, 901 – 13 Street S.W., on Wednesday, September 14, 2016, from 7:00 p.m. to 8:30 p.m. Martha’s life will be celebrated at Cook Southland Funeral Chapel on Thursday, September 15, 2016, at 11:00 a.m. with Rev. Tom Anderst officiating. A private family graveside service with Rev. Rubin Herrmann officiating will take place prior to the celebration. For those not able to attend, the Celebration of Martha’s life will be live-streamed and may be viewed by visiting www.cook southland.com at the scheduled time. (Condolences may be expressed by visiting www.cooksouthland.com) Memorial donations in Martha’s name may be made directly to Home Care, c/o the Medicine Hat & District Health Foundation, MHRH, 666 – 5th Street S.W., Medicine Hat, Alberta, T1A 4H6 Honoured to serve the family is