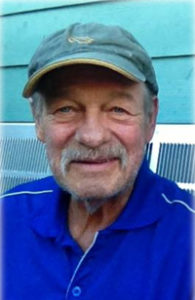 It is with sadness that the family of Gerald Koenig, beloved husband of Carol Koenig, announce his passing at the Medicine Hat Regional Hospital on Wednesday, September 7, 2016, at the age of 70 years. Gerald was born on August 30, 1946 in the Medicine Hat General Hospital and then moved to Monitor, AB., where he was raised and attended school. On May 31, 1974, Gerald married Carol Rathwell at the Court House in Medicine Hat. He worked as a Gas Field Operator for Atlantic Rich then with Petro Canada as well as Suncor. He was a realist who loved nature and had strong opinions on just about every topic imaginable. Gerald loved camping, big game hunting, fishing, fossil finding and especially spending time with his family. He was a member of the Alberta Fish and Game Association for many years. Gerald’s pride and joy were the births of his children and grandchildren, and he treasured in the fact that he made it to his 70th Birthday retiring with a pension. He had a strong connection to his dogs, Dorian, Tia, Bambie and Choe and in particular, Betsy the Hereford cow. Gerald claimed he was the first of the “Great White Hunters” and lived each day like he was. He will be forever treasured in the hearts of his family, wife, Carol; children, Jason Koenig and his dog, Chevy; Jeremy (Alisha) Koenig and their daughter, Chloe; Jamie (Calvin) Osgood and their daughters, Kailey and Keira. Gerald will also be remembered by his siblings, Vern Koenig of Medicine Hat and Edith (Gary) Onnuseti of Fairport, NY., as well as numerous nieces and nephews. Gerald was predeceased by his parents, John and Nathalia (Dolly) Koenig; and grandson, Chance Koenig. A Celebration of Gerald’s life will take place at Cook Southland Funeral Chapel, 901 – 13 Street S.W., Medicine Hat, on Friday, September 16, 2016 at 11:00 a.m., with Life Celebrant Gerry Getz officiating. If friends so desire, memorial tributes in Gerald’s name may be directed to the Canadian Cancer Society, 102 Crestwood Square One, 1865 Dunmore Road, S.E., Medicine Hat, AB. T1A 1Z8; or to the Kidney Foundation of Canada, 6007 – 1Aâ€ˆStreet S.W., Calgary, AB. T2H 0G5 or to the Canadian Diabetes Association, 102, 73 – 7 Street S.E., Medicine Hat, Alberta T1A 1J2. (Condolences may be expressed by visiting our website at www.cooksouthland.com) Honoured to serve the family is

One Condolence for “GERALD KOENIG”