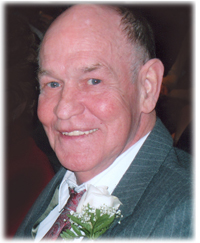 Mr. Norman Francis “Frank” Vair, beloved husband of Mrs. Elaine Vair, passed away in Medicine Hat on Tuesday, September 13, 2016, at the age of 74 years. Frank was born in Lethbridge, AB., and raised in Medicine Hat. He married Elaine Baumback, on October 6, 1962, at St. Patrick’s Church in Medicine Hat. He worked as a Plumber’s assistant and general labourer, retiring in 2004 from Wilden Mechanical. Frank was an avid sports fan and attended many Tiger games working as a penalty box attendant for more than 25 years. He loved the Toronto Blue Jays, coffee at the mall with his friends and watching historical documentaries on TV. Frank loved to make people laugh with his quick wit and humorous down to earth banter. He was especially fond of visits from his grandchildren and great-grandchildren, whom he treated with little gifts or some spending money. Through the years, Frank enjoyed playing fastball, bowling and pool and has a full trophy cas to show off his achievements. Frank loved to cook and always had a pot of homemade soup on the stove or something baking in the oven to share with whoever came to visit. His life will be forever treasured in the hearts of his wife, Elaine; children, Michael (Kimberly) Vair, Donna (Dan) Pede, Cory (Adrienne) Vair all of Medicine Hat; eight grandchildren, six great-grandchildren as well as numerous nieces and nephews. Frank will also be remembered by his brothers, Don (Dixie) and Tom (Diane) of Medicine Hat; sisters, Peggy (Mike) Dase of Pincher Creek, Pat Franzen of Medicine Hat, Anna Mae Vair of Calgary, Susan (Henry) Seifried of Brooks, Vicki (Tony) Steidel of Duchess; sister-in-law, Gloria Vair of Medicine Hat. He was predeceased by his parents, Norman and Marie Vair (nee McCartney); sister, Lillian Vair; brothers, James and Kenneth Vair; in-laws, John and Melita Baumback. The family will honour Frank’s life with a private graveside service at Hillside Cemetery. Family and friends are invited to share in a Come & Go Reception at Cook Southland Funeral Chapel, 901 – 13 Street SW, Medicine Hat, on Friday, September 16, 2016 from 3:00 p.m. to 5:00 p.m. If friends so desire, memorial donations in Frank’s name may be made to the Alberta Lung Association, P.O. Box 4700, Stn South, Edmonton, AB. T6E 9Z9. (Condolences may be expressed by visiting our website at www.cooksouthland.com) Honoured to serve the family is