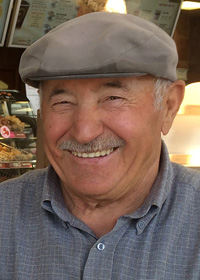 Pasquale went to be with the lord suddenly, on Sunday, September 11, 2016, after a short but brave battle with Cancer.

He was predeceased by his first wife Maria, brothers Armando, Carmine, Nicola, Pietro and his sister Beatrice and numerous brothers and sisters –in-law.

On March 21, 1933 in Sessano, Italy the extraordinary life of Pasquale began. Coming from a family of 9 children, life was difficult but somehow they all survived. During the war years, as a young child, he often spoke of going into the mountains with his brothers and sisters to avoid the bombing raids. In 1954 Pasquale married his childhood sweetheart, Maria and they were blessed with two sons, Renato and Silvano. In 1962 they travelled with their 2 small children for a better life in Canada. They first came to live in the small community of Blairmore , AB where Pasquale worked for CP Rail. In 1969 they moved to Lethbridge, AB where Pasquale worked for Sven Erickson’s Bakery eventually returning to CP Rail, retiring at the age of 65. Sadly after 40 years of marriage his wife Maria passed away. Pasquale was to find love for the second time when in 1998 he married Lilia Cattoni and had been married happily for the past 18 years.

Above all else Pasquale was a family man embracing everyone with all his heart. Love above all else is the legacy he leaves behind.