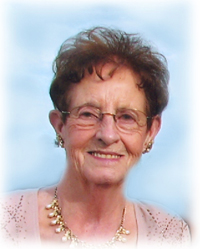 Doreen Grendahl, beloved wife of Harvey Grendahl, fell asleep in death, Thursday, August 25, 2016, at the age of 89 years. The Scripture in Proverbs 31:10,11 asks, “Who can find a capable wife?” Harvey found and married that girl on June 27, 1947, she truly was more value than corals as the scripture goes on to say. Doreen is survived by her loving husband, Harvey and son, Ken. Her grandchildren, Leam and Brynna, as well as her sister, Betty. Doreen loved to tell people about the promise of Jehovah’s Kingdom where pain and death will be no more. We look forward to seeing her then with her health and vitality restored. A Memorial Service will be held at the Kingdom Hall of Jehovah’s Witnesses, 62 Valleyview Drive S.W., Medicine Hat on Saturday, September 24, 2016, at 4:00 p.m. with Bill Rae officiating. (Condolences may be expressed by visiting our website at www.cooksouthland.com) Honoured to serve the family is