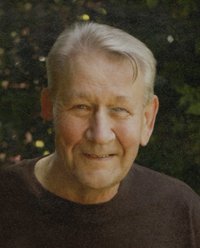 Born in a rural farmhouse in Rockyford, Alberta, Lynn lived throughout the province before settling in Medicine Hat for the last 40 years. He traveled the world yet always returned to his beloved prairies. Lynn was a true jack of all trades, including many years as a power lineman. Throughout his eighty-one years there is hardly a vocation that he did not pursue. The job he loved most however, was thirteen years spent as the live-in caretaker at Echo Dale Park following his retirement. He treated everyone equally and had a unique ability to connect with all he came into contact with. His quick wit and ability to match any moment with the perfect aphorism will be missed by all who were lucky enough to know him. He leaves his beloved wife of 48 years, Christine Suelzle. His legacy lives on with his sons and their children; Terry Suelzle of White Rock, BC [Ryker, Jazmyn, Ewan], Trevor (Rebecca) Suelzle of Salt Lake City, UT [Elle, Ainsley, Anden, Oriahna, Petra]; daughter-in-law, Nikki (Todd) Johansen of Medicine Hat, AB [Ethan, Joshua, Adam, Ayla]. He is predeceased by his youngest son, Dr. Troy J. Suelzle; and his younger sister, Margaret Rose. Survived by his twin sisters, Evelyn Lumsden and Eunice Weisbeck. His was a life lived to the fullest, his passing a period of unmatched dignity and poise. In his final weeks he was able to claim that he left nothing on his bucket list, so he kicked it. A gentle, kind man has left us and will be missed greatly. As a tribute to Lynn, tell a joke, make a friend, and cheer for the Jays. A Memorial Service will be held at CHURCH OF JESUS CHRIST OF LATTER-DAY SAINTS, 1865 Division Avenue NE, on Wednesday, September 21st, 2016 at 11:00 a.m. with Bishop Mike McClung officiating. Memorial gifts in Lynn’s memory may be made to the Canadian Cancer Society, 325 Manning Road NE, Calgary, AB T2E 2P5 or to the Palliative Care Unit, c/o Medicine Hat & District Health Foundation, 666 – 5th Street SW, Medicine Hat, AB T1A 4H6. Condolences may be sent through www.saamis.com or to condolences@saamis.com subject heading Lynn Suelzle. Funeral arrangements entrusted to