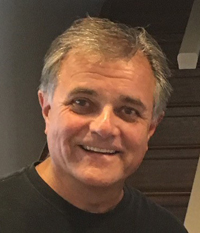 It is with great sadness that we announce the sudden passing of Terry on Sunday, September 18th, 2016. He is survived by his wife, Susan; children, Ron (Andrea) Schank and Angie (Jeff) Kettles; and grandchildren, Sebastian, Ella, Isabel, and Ruby. Terry is also survived by his brother, Jim (Doreen) Schank and their children, Kim, Carrie, Jason and families; his sister, Carol (Walter) Krysiak and their children Cathy, Karen, and families; two brothers-in-law, Elmer Stabler and Pete Massine; and his sister-in-law, Linda Barrand and her daughter, Lindsay; as well as numerous nieces and nephews. Terry was predeceased by his parents, Sam and Frieda Schank; his brother, Bob; his sisters, Evelyn, Dorothy and Pat; and his mother-in-law, Doris Williams.

Terry was born in Medicine Hat on September 7th, 1956, the youngest of seven siblings. Childhood memories of family, fishing expeditions, camping, Boy Scouts, and hockey were among some of his favourites. He was proud to have traveled to Vancouver with his team to participate in the National Little League Championship in 1967. Terry graduated from MHHS in 1974 and married his high school sweetheart, Susan, in October 1976. Terry and Susan were looking forward to celebrating their 40th wedding anniversary in October with an eleven-day cruise exploring the Caribbean.

Terry worked for the City of Medicine Hat Electrical Department as Power Electrician from 1978 until 2005. He then jumped into a new opportunity and became the Assistant Business Manager with the IBEW 254 from 2005 until his retirement in January 2016.

Terry loved his family and friends deeply and looked forward to Sunday suppers where he would cook his favourite meals for his family and friends. He was extremely proud of his children, and was the best “Papa” to his grandkids. He truly loved having his grandchildren at their home for sleepovers, to watch a movie, or read stories to them. Terry and Susan were avid travelers, and loved their river boat cruises in Europe and their numerous Italy trips. Terry’s knowledge and love of 1960’s to 1990’s rock music was amazing. He would not only know all the songs on the albums, but the various artists who played on them. Music could always be heard in their home. Terry was a diehard Montreal Canadiens fan and had some incredible memorabilia of his favourite team. He loved baseball and went to many cactus league games down in Phoenix. He often said there was nothing better than an ice cold beer in one hand and a hotdog in the other, watching ball under the clear blue skies.

Terry loved to get together with friends and sit back and have a few ‘wobbly-pops’ around the fire pit, or sit around the kitchen table to the wee hours of the morning talking about life and the adventures they could do together. Terry had a huge heart and was truly a great friend to many people. He would give the shirt off his back if he knew you needed help.

A Celebration of Terry’s Life will be held at the GRANDSTAND BANQUET ROOM, Medicine Hat Exhibition and Stampede, 2055 – 21st Avenue SE, on Saturday, September 24th, 2016 at 2:00 p.m. Memorial gifts in Terry’s name may be made to the Medicine Hat & District Health Foundation, Pediatric Unit, 666 – 5th Street SW, Medicine Hat, Alberta, T1A 4H6. Condolences may be sent through www.saamis.com or to condolences@saamis.com subject heading Terry Schank. Funeral arrangements are entrusted to