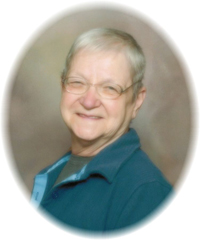 Milissa Irene Potter (née Beck) was born May 1, 1943 in Medicine Hat, Alberta, the only and very spoiled, daughter of Milton and Irene Beck. A story is told of her racing home in her car in the early morning hours after missing curfew, she missed a stop sign and cut off the milk truck. All those glass milk bottles didn’t fair too well. Milissa didn’t stop, got home and snuck into her room. Unfortunately, the milkman knew exactly who she was and was knocking at the door right behind her. Even though she got caught, it didn’t slow her down. She loved fast cars and racing down the roads. I imagine her teenage years were hard on her parents. Milissa finished school and went to work at the glass factory. It didn’t suit her, so she went to night school to learn bookkeeping and went to work at Horne and Pittfield. She met and married Ken Reuer and had two wonderful children, Kerry and Denise. Milissa and the children moved to Brooks, Alberta where she kept books for Crown Mart Lumber. Millissa met the love of her life, Doug Potter, and they married bringing one more little bundle, Shauna, into this perfect family. Milissa and Doug worked together at the Crown Mart then decided Snyder’s Autowreckers was a better fit. Eventually, Milissa moved to Sturgeon Accounting where she stayed until they moved north. They bought land at Gordondale and proceeded to make a beautiful new home and life, with many camping, quadding and family times. Milissa loved jumping on her quad and heading out for the day, but she got bored with too much home time and she was on the hunt for work again. She found a great job at Baytree UFA and she made new friends with coworkers and customers alike. Unfortunately, Doug passed away in 2014 and a little of her light dimmed. She carried on strongly, just a little quieter, like always. She even learned to drive that big ol’ motorhome. Milissa was very protective and tried to take care of us all in her own way. There will be an emptiness in our lives but we are thankful she has been reunited with the love of her life. Until we meet again, we love you! A funeral service was held September 22, 2016 at Grace Lutheran Church, officiated by Pastor Cory Lizotte. To leave condolences for the family or to make a donation in Milissa’s memory, please visit www.bergeronfunerals.com. Arrangements were entrusted to Bergeron Funeral Services & Crematorium Ltd.