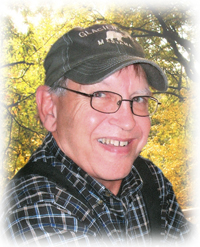 It is with sadness that the family of Ronald Joseph Kehn announce his passing at the Medicine Hat Regional Hospital on Monday, September 26, 2016, at the age of 61 years. Ron was born, raised and received his education in Medicine Hat. He worked a number of years at Canadian Fertilizers and loved to take his motorcycle on a ride whenever possible. He was always offering a helping hand and his giving nature was evident through his participation in many of the charitable motorcycle runs. Ron leaves to cherish his memory: daughter, Heather (Sam) Gust and their children, Mack and Macy; Son, Jason Kehn (Meagan) as well as Heather and Jason’s mother, Brenda. He will also be lovingly remembered by his mother, Elza; sister, Anita (Colin) Hyde and their son, Troy; brothers, Cliff (Linda) Kehn and their daughter, Melany (Rob) and her family and Sherrie Lin’s family; brother, Edward (Debbie) Kehn and their children, Jessica and Justin as well as numerous other extended family. He was predeceased by his father, Arthur; one niece, Sherrie Lin as well as his best buddy…his dog, Boomer. Those wishing to pay their respects may do so starting at noon, one hour prior to the Celebration of Ron’s life which will be held at Cook Southland Funeral Chapel, 901 – 13 Street S.W., Medicine Hat on Thursday, September 29, 2016, at 1:00 p.m. A time of fellowship and refreshments will follow thereafter at the Whiskey Creek Pub. It would be Ron’s wish that everyone attending his celebration wear whatever they are comfortable in. Family wish to extend their heartfelt appreciation to the Doctors, nurses and staff of 5 East at the Medicine Hat Regional Hospital for their care and support over the last couple of years. (Condolences may be expressed by visiting our website at www.cooksouthland.com) Honoured to serve the family is