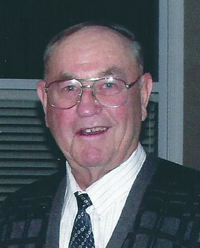 Donald was born on the family farm south of Consul on January 23, 1934 the second child and only son of Edith & Stanley Schmidt. In 1961 Donald married Daphne Anne McDowell. Donald bought the family farm in 1969. Donald enjoyed many interests while on the family farm; quarter horses, cattle, team roping, cow riding, and calf roping. Donald was a member of the Battle Creek roping club. He was a councillor for the RM of Reno and he belonged to the Masons. Donald and Daphne retired to Medicine Hat in 1996. Retirement brought much joy with golfing, bowling, pool, fishing, casino and coffeeing with all his many friends.

If people so wish a donation may be made in Donald’s name to a charity of their choice. A private family Interment will take place at the Consul Cemetery. Binkley’s Funeral Service Maple Creek & Leader in charge of arrangements, 306-662-2292. www.binkleysfuneralservice.com