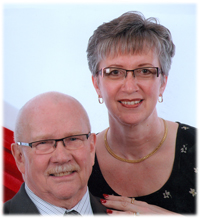 Sheila Kathy Carlson left her earthly home on Saturday, September 17, 2016, at 6:30 p.m. Sheila passed away very peacefully in the arms of her loving husband, Earl and into the arms of our Lord and Savior, Jesus Christ. Sheila was born on June 29, 1955, to very proud parents, Howard and Celia Lutz in Olds, Alberta and lived her childhood in several places including Olds, Alberta, Weyburn, Saskatchewan and settled in Medicine Hat until the time of her passing. She married Earl Carlson on November 21, 1975 and together they made their home in Medicine Hat where they raised their family. They were married close to 41 wonderful years. Sheila leaves behind her children, Melissa (Rob) Hozack and their children, Ivy, Ira and Ila; Brent Carlson, and his children, Cadence and Rayne; Derik Carlson all of Medicine Hat. She is also survived by her sister, Charlene Graveline; her brother, Barry Lutz as well as numerous nieces and nephews. Sheila is also leaves behind her step-children, Curtis Carlson and Kim (Lloyd) Gooch and their children and grandchildren, Kelly (Phyllis) Carlson and their children. Sheila dearly loved all her children, grandchildren and great-grandchildren equally. As a young bride of 20, she helped Earl raise Kim and Kelly through their teenage years. After Earl retired from his job in 2000 as a maintenance supervisor for Prairie Rose, he joined Sheila in creating their own business, Carlson’s Painting and More. She got to do the work she loved so much and was quickly dubbed the “Painter Lady” as evidenced be her license plate “PNTRLDY”. She became partners with her two very good friends, Dave Meehan and Brad Phillips and continued her passion for painting until being diagnosed with cancer five years ago. Earl worked along side of her doing odd maintenance jobs whenever she had a client in need of his skills. Whenever she had a break from chemotherapy or the numerous surgeries she endured, Sheila and Earl would take full advantage and enjoyed many cruises and vacations including Las Vegas, Nashville and many special places in Mexico. Her last stay in Mexico was a gift from a very dear high school friend who supplied his condo for Sheila to enjoy these past two Octobers and enjoyed it she did! She loved it there and called it a paradise on earth. Sheila was predeceased by her father and mother, Howard and Celia Lutz; her inlaws, Dahl and Ingrid Carlson and her beloved sister and friend, Brenda Cuthbert. They, as well as many other family and friends, will meet her with joy and celebration. A Celebration of Sheila’s life will be held at Cook Southland Funeral Chapel, 901 – 13 Street S.W., Medicine Hat on Saturday, October 1, 2016, at 2:00 p.m. with Life Celebrant Gerry Getz officiating. (Condolences may be expressed by visiting our website at www.cooksouthland.com). Those wishing to donate in Sheila’s memory are asked to please make a donation to St. Joseph’s Home Carmel Hospice, 156 – 3 Street N.E., Medicine Hat, Alberta, T1A 5M1. Please mark your donation to be used towards the purchase of a double hospital bed in her memory so loved ones can share comfort together at the end of life. Honoured to serve the family is