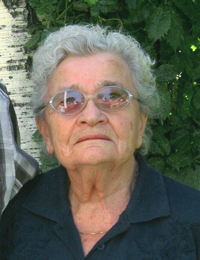 Erna Keller passed away peacefully on Sept. 30, 2016 in Lacombe, Alberta at the age of 88. She now rests peacefully in the arms of her Lord, Jesus Christ. She grew up in Switzerland and in 1953 moved to Alberta with her husband Ernie. Together they settled in Medicine Hat and it was there they raised their two children and ran their honey business. She was known for her wonderful flowers, garden and for the honey sales from home. She moved to Lacombe with her husband four years ago so they could be closer to their son. She is lovingly remembered and will be dearly missed by her husband of 63 years, Ernie, her daughter Anita (Mark), son Ron (Deanna) and six grandchildren, Matthew (Amy), Adam (Christy), Anna (Jonathon), Bradd (Shevaun), Kathleen (Michael), Angeline, three great grandchildren, as well as three step grandchildren; Chad, Justin (Melissa), and Brittany. A big “Thank You” to Dr. Darnelll and the nursing staff for their compassion and care during the last three weeks of her life.

A funeral service will take place at 1:00pm on Wednesday October 05, 2016 at the Lacombe Pentecostal Church (40331, Range Road 27-1, Lacombe, AB T4L 1K7) with interment to follow at the Lacombe Fairview Cemetery.

Condolences may be made by visiting www.wilsonsfuneralchapel.ca

Serving Central Alberta with locations in Lacombe and Rimbey

in charge of arrangements.

“A Caring Family, Caring for Families”

One Condolence for “KELLER, ERNA”