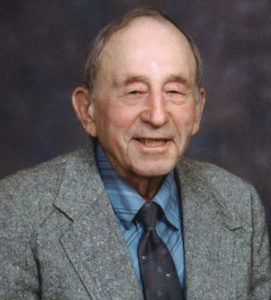 William “Bill” Carl Anderson of Medicine Hat, beloved husband of the late Frances Anderson, passed away on Wednesday, September 28th, 2016 at the age of 94 years. Bill leaves to cherish his memory one son, David (Darlene) Anderson of Hanna; two grandchildren, Michelle Anderson (Will Mihin) and Lisa Anderson; two great grandchildren, Quinn and Kole Mihin; one brother, Ted Anderson; three sisters, Sheila (Tal) Talarico, Iris Anderson, and Joan Standish; as well as numerous nieces and nephews and Frances’ family. Bill was predeceased by his wife, Frances Anderson; his parents, Bennie and Pauline Anderson; his son, William Anderson; one brother, Gene (Violet) Anderson; and one sister, Alice (Ed) Fischbuch. Bill was raised and educated in Buffalo. He farmed with his dad for fourteen years before starting his own construction company, The Earth Moving Construction business, WCA Construction Ltd. Bill married Frances in Calgary on November 3rd, 1962 and relocated to Caroline and then Hanna where they raised their two boys. He retired in 2003 and moved to Medicine Hat. Bill enjoyed mechanics, welding, computers, playing cards and pool. He especially loved spending time with his family. The Funeral Mass will be celebrated at ST. PATRICK’S ROMAN CATHOLIC CHURCH, 238 – 2nd Avenue NE, on Friday, October 7th, 2016 at 11:00 a.m. with Father Tomy Manjaly, celebrant. Interment will take place in the Hanna Cemetery at a later date. Memorial gifts in Bill’s memory may be made to the SPCA, 55 Southwest Drive SW, Medicine Hat, Alberta, T1A 8E8. Condolences may be sent through www.saamis.com or to condolences@saamis.com subject heading Bill Anderson. Funeral arrangements are entrusted to