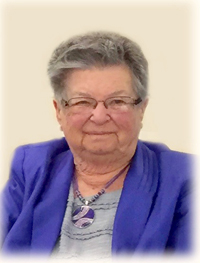 It is with sadness that family announce the passing of their dear mother, Sofia Elsie Andreas, beloved wife of the late William (Bill) Andreas, at the Medicine Hat Regional Hospital on Friday, September 30, 2016, at the age of 85 years. Sofia was born in Swift Current, SK., to Arthur and Francis Marion. She attended school at Lemsford and then Lancer after moving there. Sofia’s Catholic faith was strong and she believed in “The Lord”. She was an active member in the church for years and a lifetime member of the Lancer, CWL. Sofia worked at her Dad’s store as a telephone operator, and in her later years, as a mother and a homemaker. Sofia also worked as an enumerator for Census Canada for many years. A very elegant lady with a great sense of humour, Sofia was a gracious hostess to anyone who came to her home, whether it was in Lancer, Beaver Flats, Mesa or Medicine Hat. She enjoyed bowling, dancing, curling, knitting, reading books, doing puzzles, playing cards and listening to her records and CD’s. Sofia loved to watch ball and hockey on TV and also enjoyed travelling, be it by car, bus, train, boat or airplane. Active in the communities in which she lived, Sofia was a board member on the local and district school boards for many years as well as a leader of the local Brownies. She was known for her famous pork chops and dumplings, kuchen, cabbage rolls and her chocolate chiffon cake. During their time in Lancer, Sofia always hosted brunches at her home after Sunday mass and midnight lunches after Christmas Eve mass. She looked forward to her annual weekend getaways with her four daughters. Sofia’s memory will be forever treasured in the hearts of her children, Carol Ann (Doug) Getz, Randy (Debbie) Andreas, Arden (Sherry) Andreas, Louise (Ken) Trembath, Mark (Lori) Andreas, Marcel (Anita) Andreas, Paulette (Mike) Heard, Laura (Barry) Tuchscherer; 23 grandchildren and 19 great-grandchildren. She will also be lovingly remembered by her siblings, Rose O’Kane, Victor (Diana) Marion and Sheila Marion; brother-in-law, Tom Andreas and sister-in-law, Kay Andreas. Along with William Andreas, her loving husband of 60 years, Sofia was predeceased by her parents, Arthur and Francis Marion; brother, Edmond Marion; brother-in-law, Terry O’Kane; sister-in-law, Jackie Marion; father-in-law, George Andreas and mother-in-law, Barbara Andreas as well as numerous other brothers-in-law, sisters-in-law and the many nieces and nephews. The Funeral Mass will be celebrated at St. Patrick’s Roman Catholic Church, 238 – 2 Avenue N.E., Medicine Hat on Friday, October 7, 2016, at 3:00 p.m. with Reverend Father Francis Tran celebrant. Interment will take place in the Memorial Cemetery at Lancer, SK., on Saturday, October 8, 2016. (Condolences may be expressed by visiting our website at www.cooksouthland.com) Those wishing to remember Sofia may do so through a donation to the Dialysis Unit at the Medicine Hat Regional Hospital. Donations should be made payable to the Medicine Hat and District Health Foundation, 666 – 5 Street S.W., Medicine Hat, Alberta, T1A 4H6. Honoured to serve the family is

One Condolence for “SOFIA ELSIE ANDREAS”