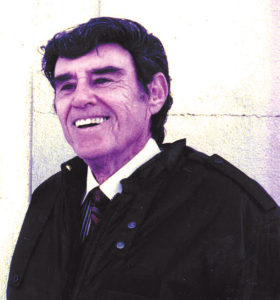 At the very “golden age” of 99 years (almost), Art died peacefully at his home, with family, (after a short illness period). No doubt, Art lived his long life, to the fullest.

He was born in the family’s sod-built house, on their homestead farm at Hilda, Alberta. Art was one of 11 children, all of whom he survived, by over 25 years. After leaving the farm, Art had a variety of commercial experiences, from being a hotel bellhop, small grocery store owner, and then, proudly, starting the first real estate brokerage firm in Medicine Hat, called “Business, Home & Farm Locators”. In time, he also became engaged in construction, ranching and feedlot operations, property ownership and other businesses. It was very busy!

However, with very substantial economic setback in the 1960’s, Art ventured to Los Angeles, to start all over, in “the big city”, at the age of 43. There, he began as a “freshman” real estate agent. After a while, he was able to buy some small “fixer-upper” houses, and then acquire a small apartment building. At his death, Art still owned, managed, and rented out, two of the original “fixer-upper” houses.

During a period of grieving, (due to the loss of his second wife, June), in the early 70’s, Art was introduced to the Seventh Day Adventist Church, by his sister Clara. It was life altering for Art. With his baptism, the Church and his Christian faith became absolutely central to him and, then to his current and loving wife, LuAnne, for over 40 years.

In the early 1990’s, Art was the inspiration, land acquirer, re-zoner and the “around the clock”, on site, general contractor for the building of a community centre annex for “his” Adventist church in Santa Monica. In 1996 on the celebratory opening of the new addition, it was, named the “Felesky Hall”, by the congregation, in honour of Art’s exceptional and multi-years of service. Art and LuAnne together have also extended their personal care, assistance and “witnessing” to a number of people and families throughout the years.

Art will be forever remembered for his faith, charm, humour, his big heart, and his insatiable love and pride of family, as well as, his strict vegan diet, “interesting” cooking, energy (including daily 3 mile walks, until recently), and his quick mind. He was a shark at the home pool table and a master of the checkerboard, where he would whip, any and all, family members in the ritual game to be played with each visit. Remarkably, as late as March of this year, Art had the acuity to compile and complete his California income tax return by himself, again.

Art is survived by his wife LuAnne (to whom the rest of the family is eternally grateful for her incredible love and care for Art), his son Brian (Stephanie), daughter Pamela, five grandchildren and ten great grandchildren, as well as LuAnne’s sister-in-law and her three nieces and their family. Art is also survived by a “village” of other relatives, mainly in the “Hat” area. We are very grateful for the kindness of the medical team, the at home caregivers and the hospice providers.

Condolences may be sent through http://www.tributes.com/obituary/show/ Arthur-Felesky-103996031 or by mail to 3240 Shelby Dr., Los Angeles, CA 90034. In lieu of flowers, you may wish to contribute to the charity of your choice. Also, please, sit down with a grandchild or other loved one, and have a game of checkers!

One Condolence for “ART FELESKY”