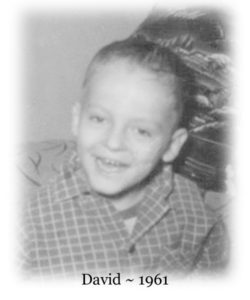 David Krushel passed away unexpectedly at Redi Enterprises Group Home in Medicine Hat on Saturday, October 1, 2016, at the age of 60 years. David was born in Medicine Hat on August 13, 1956, a son to Edward and Rose Krushel. At the age of eight months, he was diagnosed with spinal meningitis, a debilitating disease which began to deteriorate his mental and physical health. He spent his early childhood years with his family and played like any other young boy. As his health continued to fail, the need for specialized care was evident and David was placed in the Michener Centre in Red Deer. He was first admitted in 1962 for a brief time and then became a permanent resident in 1964. In 1996, David was moved back to Medicine Hat where he resided in the wonderful care of Redi Enterprises. David was a character who had a mind of his own and clearly expressed himself with his unique gestures of communication. He enjoyed outings and the experience of going camping, but most of all, he loved Star Trek! His presence will be missed. David is survived by his four siblings, Wilf (Gladys) Krushel, Shirley Cowie, Margaret Krushel and John Krushel; his extended family and friends of Redi as well as numerous nieces and nephews. He was predeceased by his parents and two sisters, Bernice and Elizabeth. The Funeral Service will be held at Cook Southland Funeral Chapel, 901 – 13 Street S.W., Medicine Hat on Tuesday, October 11, 2016, at 11:00 a.m. with Life Celebrant Gerry Getz officiating. Interment will follow at Hillside Cemetery with a time of fellowship thereafter in the Cook Southland Reception Facility. (Condolences may be expressed by visiting www.cooksouthland.com) Memorial donations in David’s name may be made directly to Redi Enterprises, 860 Allowance Ave. S.E., Medicine Hat, Alberta, T1A 7S6. Honoured to serve the family is