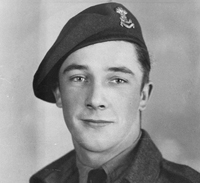 John Eresman of Calgary, AB, passed away peacefully with family around him on Thursday, October 6, 2016 at the age of 94 years.

John grew up on the family farm near Fox Valley, Sask. At age 21 he was enlisted into the Army until the end of WWII in 1945. During the war he served as an infantryman with the Prince of Wales Rangers. After the war John returned to the family farm until he married Rose in 1948.

John and Rose farmed, ran a small grocery store, and worked at various jobs. John spent most of his working life, 30 years, with the City of Medicine-Hat. In retirement John and Rose made many friends living in Sorrento BC, and wintering in Arizona. They eventually settled in Calgary to be near their family.

John loved to garden and make various cured meats and sausages, and in later years enjoyed reading novels. He was always actively engaged in following politics and believed strongly in exercising his vote. He was a devout Catholic and lifetime member of the Knights of Columbus. He also loved to watch his beloved Blue Jays who fittingly won 10-1 on the day he passed.

He was predeceased by his loving Wife Rose of 65 years; son Murray; parents Clements and Magdalena; brothers, Nick Eresman and Ferdinand Eresman, and sister’s Mary Schneider and Pauline Volk.

We will miss him very much…

A special thanks to his two wonderful caregivers Joy and May.

Graveside Service will be held at Hillside Cemetery, Medicine Hat, followed by a memorial open house. This will be communicated to family and friends at a later date.

One Condolence for “ERESMAN, John”