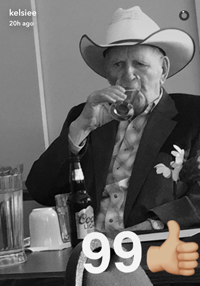 On October 8, 2016, at the wonderful age of 99 years FRANK Fowlie passed away peacefully at Sunnyside Nursing Home, where for the past 2 years he had been cared for with genuine compassion. Frank was born in the home on the Fowlie homestead in Social Plains, Alberta on September 25, 1917. He was the fourth child born to William & Christina Fowlie, joining big brothers, Bill and Jack and sister, Helen (Elle Hern) and baby brother, Georgie joined the family a few years later. Frank attended Social Plains School helping Elle with the janitorial chores. School was NOT his “thing” and to prove it…he has his “school leaving certificate” for the end of grade nine. At 15 years of age he had to do a man’s day of work. His dad passed away shortly after and Frank took over the responsibilities of the farm. The Social Plains teachers were often boarded at the Fowlie home and it was Frank’s lucky day when Miss Helen Holt arrived to teach. The romance flourished and they were married as soon as school was out…July 3, 1943. They were a devoted couple for 57 years. Two boys arrived to complete their family, Lloyd in 1945 and Lynn in 1951. Frank loved farming…as long as it was with horses. When tractors replaced the teams, Frank lost his enjoyment in farming. He enjoyed his cattle herd and good saddle horses all of his life. He raised a herd of purebred horned Herefords and was one of the initial contributors to the Medicine Hat Bull Sale. He enjoyed playing ball, pitching for Bindloss at many Sports Days. His love of ball continued after retirement and he played a lot of slow pitch in Medicine Hat. He also took up golf and enjoyed the game well into his nineties. Frank was ALWAYS ready for a game of cards. Bridge was his favorite. Many games were played with his mom and brothers, with Helen and the boys, with his grandchildren and great grandchildren… Amazing!! The crib games with his niece, Marilyn and his sister, Elle were pretty competitive for the loonie that was at stake. Irene Romeril was one of their first good friends in Medicine Hat. Irene later became Frank’s very special friend. They enjoyed many crib games together with the folks at Redcliff and Strathcona Centre He was always very focused on family. Whether it was his sons, grand kids or his great grand kids, he truly enjoyed being able to cheer them on in any activity. Frank will always be remembered with love and pride by his family, Lloyd and Linda (Crocker), their daughter, Laurie and son, Shane, Laurie’s children, Colton, Kelsie and Tanner Battrum, Lynn and Betty Lou (Hern) and their daughters, Tammy (Kyle) Brown and children, Cloey and Hunter, Denise (Dan) Phoenix and children, Nolan and Avery, Barbara (Colin) McNiven and children, Rena & Mier, and many special nieces and nephews. Frank’s life is truly a life to be celebrated. He has left us all a wonderful Legacy. Be honest, and be true to your word. A handshake has meaning. If you have a job to do …do it!! Family and friends are important! Hang on to the cow’s tail and she will pull you through the tough times. The family would like to thank all who brightened Frank’s day. Especially Dr. Booyens and the staff at Sunnyside who went above and beyond in their friendship and wonderful care of Frank. Those wishing to pay their respects may do so at SAAMIS MEMORIAL FUNERAL CHAPEL, #1 Dunmore Road SE, on Thursday from 7:00 until 9:00 p.m. The Funeral Service will be held at WESTMINSTER UNITED CHURCH, 101 – 6th Street SE, on Friday, October 14, 2016 at 1:00 p.m. with Reverend Chelsea Masterman and Dr. Shane P. Andrus co-officiating. Interment will take place at Hillside Cemetery. Memorial gifts in Frank’s memory may be made to the Juvenile Diabetes Association, #300, 1725 – 10th Avenue SW, Calgary, Alberta, T3C 0K1 or a charity of one’s choice. Condolences may be sent thought www.saamis.com or to condolences@saamis.com subject heading Frank Fowlie. Funeral arrangements are entrusted to