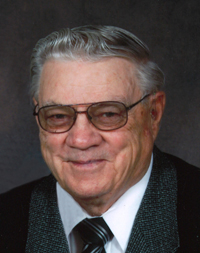 James Bruce Major, beloved husband of Irma Major, passed away in Bow Island on Friday, October 7, 2016 at the age of 89 years.

The Funeral Service will be held at the Evangelical Free Church, 214 – 4 Avenue West, Bow Island on Thursday, October 13, 2016 at 2:00 P.M. Burial to follow at the Bow Island Cemetery. Condolences may be forwarded by visiting our website at www.southlandfuneral.com.

Bruce was born to William and Jean Major in Unity, Saskatchewan on August 26, 1927. He spent his early life learning farming from his dad on their family farm. Bruce met and married the love of his life, Irma, on March 25, 1949 in Onoway, Alberta. Bruce enjoyed a various places of employment until he returned to his love of farming and settled outside Burdett. After his retirement, Bruce continued to help out at the farm, now owned by Beverly and Andrew Dykstra.

Besides his wife, Bruce’s loves included restoring antique tractors, helping out at the farm, spending time with family and friends, playing cards, gardening and being a part of his church family.

Bruce will be remembered for his sense of humor, visits to the farm, love for coffee times at the Rolling Pin Bakery and doting on his bride of sixty seven years.

If friends so desire, memorial tributes in Bruce’s name may be made directly to the Bow Island and District Health Foundation (Palliative Care wing for furnishings), Bag 3990, Bow Island, Alberta T0K 0G0.