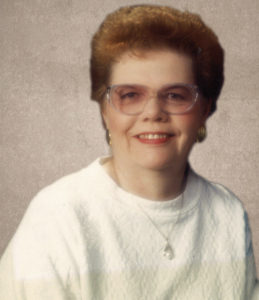 Melva Judith Lightfoot of Medicine Hat, beloved wife of the late Howard Lightfoot, passed away on Tuesday, October 18th, 2016 at the age of 85 years. Melva leaves to cherish her memory one son, Gary Lightfoot of Calgary; one daughter, Shirley Walsh of Medicine Hat; six grandchildren, Brandy (Greg) Schwenk, Stacey (Jason) Zurburg, Kristin (Craig) Noonan, Skylar (Kristen) Walsh, Cameron Lightfoot and Derrick Lightfoot; nine great grandchildren, Piper, Makiya, Chase, Damon, Keelyn, Rocklin, Ava, Nate and Adelaide; as well as numerous nieces and nephews. Melva was predeceased by her husband, Howard Lightfoot; her parents, Peter and Josephine Hatlen; two brothers, Jens Hatlen and Ken Hatlen; and her best friend, Sheila Lucks. Melva was born on July 28th, 1931 in Camrose, Alberta. She moved around Alberta and Saskatchewan while her dad worked with the CNR. Melva completed a business course in Vermilion before moving to Edmonton where she met Howard. She then moved with Howard when he gained employment with DRES. Melva worked in Ralston at a coffee shop and as a payroll clerk at CFB Suffield. They retired to Redcliff and eventually Medicine Hat, where Melva enjoyed curling, darts, VLT’s, bingo and spending time with friends at the Moose Lodge. A Private Graveside Service will take place at Saamis Prairie View Cemetery with Reverend Dennis Betker officiating. Memorial gifts in Melva’s memory may be made to the Alzheimer Society, 201, 770 – 6th Street SW, Medicine Hat, Alberta, T1A 4J6. Condolences may be sent through www.saamis.com or to condolences@saamis.com subject heading Melva Lightfoot. Funeral arrangements are entrusted to