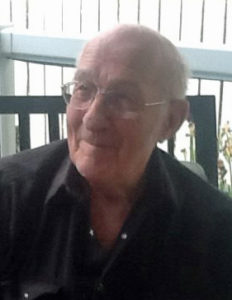 Frank Lanz of Medicine Hat, beloved husband of the late Elizabeth “Betty” Lanz, passed away on Tuesday, October 18th, 2016 at the age of 89 years. Frank leaves to cherish his memory four children, David (Linda) Lanz, Marjorie (Ewen) Leroux, Paul (Anne) Lanz and Theresa Noble; eleven grandchildren; sixteen great-grandchildren; and three sisters, Margaret Loran, Carol Skidmore and Betty Trotter. Frank was predeceased by his son, Ronald Lanz; and his parents, David and Anna Lanz. Frank was born and raised in the Lancer, Saskatchewan area, where he grew up on the farm and attended school. Frank married Elizabeth “Betty” in December of 1952 and the couple later moved to Medicine Hat where they raised five children. He worked for the Department of Highways until his retirement. Frank enjoyed spending time with his family; he loved to play cards with his grandchildren and anyone who would play cards with him. As well as playing cards, Frank enjoyed fishing and dancing. The family would like to thank the staff at 5 west, as well as the OR staff for their excellent care; Dr. Michael Bering, Dr. Joqiat, Cathy, Lindsay, Bobbie and Ian. Those wishing to pay their respects may do so at SAAMIS MEMORIAL FUNERAL CHAPEL, on Sunday from 7:00 pm to 9:00 pm. The Funeral Service will be held at SAAMIS MEMORIAL FUNERAL CHAPEL, 1 Dunmore Road SE, on Monday, October 24th, 2016 at 1:00 p.m. with Deacon Terry Olson officiating. In lieu of flowers, memorial gifts in Frank’s memory may be made to the Alberta Heart & Stroke Foundation, 124, 430 – 6th Avenue SE, Medicine Hat, Alberta, T1A 2S8 or to the Canadian Cancer Society, Alberta/NWT Division, Suite 200, 325 Manning Road NE, Calgary, Alberta, T2E 2P5. Condolences may be sent through www.saamis.com or to condolences@saamis.com subject heading Frank Lanz. Funeral arrangements are entrusted to