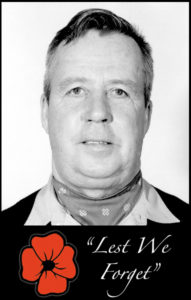 Mr. Donald Alexander passed away suddenly on Tuesday, October 18, 2016, at the age of 92 years. Along with his loving wife, Doreen Alexander, Don was predeceased by his daughter, Donna Barnabe. He will be remembered by his family, Judy (Dave) Beyea and family; Lynda (Jack) Dempsey and family; Raymond Barnabe and family; Wendy (Tom) Smith and family; Don Alexander; John (Margaret) Alexander and family as well as Kathy (Greg) Marsh. Don was born and raised in Winnipeg, Manitoba. He joined the Canadian Army on the 9th of January, 1942, and served over seas until 1945. He also spent 18 months in the Korean War, from 1951 through 1952 and served a tour on a peace keeping mission to Egypt in 1978. Don was released from the Canadian Armed Forces after 33 years and 6 months of service. He enjoyed spending time with his family and friends, playing golf and watching hockey and football. A celebration of Don’s life will be held at Cook Southland Funeral Chapel, 901 – 13 Street S.W., Medicine Hat on Monday, October 24, 2016, at 1:00 p.m. with Reverend David Pollard officiating. Interment will follow at Hillside Cemetery with a time of fellowship thereafter in the Cook Southland Reception Facility. (Condolences may be expressed by visiting our website at www.cooksouthland.com) If friends so desire, donations in memory of Don may be made to the Canadian Red Cross Society, 398 Aberdeen Street S.E., Medicine Hat, Alberta, T1A 0R2. Honoured to serve the family is