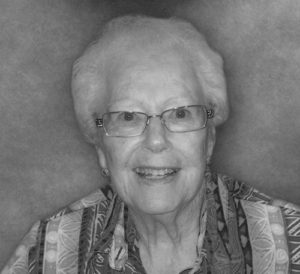 Hazel, beloved wife of the late Bert Moser passed away peacefully on October 18, 2016 at the age of 91 years.

Hazel was born on March 24, 1925 in Medicine Hat, Alberta. There, in 1949 she met and married the love of her life and best friend, Bert Lloyd Moser who sadly predeceased her in 1983. Bert’s work took them across the prairies including North Battleford, Calgary and Winnipeg. Together they made many friends, joining the local curling clubs and hosting bridge evenings. Long-time roots were set in Winnipeg where Hazel enjoyed the friendships, music and laughter of the Irish Club. Hazel had a full life raising children and grandchildren and loved nothing more than entertaining family and friends. She will be remembered by many as a devoted fan of every sport her grandchildren played, never missing a game.

Hazel was a devoted wife, mother and nana. She will be lovingly remembered by her son and daughter-in-law, Robert and Judy; her daughter and son-in-law, Doreen and Mike Moug and her precious grandchildren, Diane, Karen and John.

A family graveside service will be held at a later date. Hazel would want to be remembered with a smile. Condolences may be forwarded through www.mcinnisandholloway.com. If friends so desire, memorial donations in memory may be made to your favorite charity or commit a random act of kindness – in her memory.

We wish to express our deep appreciation to Clara and the many wonderful people at The Beverly Care Centre Midnapore who watched over and cared for our mother/nana over the past years.