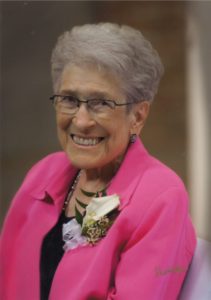 Marion Bauman of Medicine Hat, beloved wife of the late William “Bill” Bauman, passed away on Wednesday, October 19th, 2016 at the age of 89 years. Marion leaves to cherish her memory her children, Doug (Brenda) Bauman and Brenda (Russ) Farwell; one daughter-in-law, Milvia Bauman; six grandchildren, Julie (Matthew) Burbidge and their daughter Abigail, Scott Bauman (Andrea Romain), Matthew (Kyla) Bassard and their children Jackson and Gia, Megan Bauman, Kristine Farwell (Greg Parsons), and Steven Farwell; one sister, Shirley Dovell; as well as numerous nieces and nephews. Marion was predeceased by her husband, Bill; her parents, Charles and Eleanor Grylls; her son, Brian Bauman; five brothers, Bill, Harold, Charles, Fred and Norman Grylls; and two sisters, Daisy McDonald and Mary McConnell. Marion was born on September 17th, 1927 at Saskatoon and grew up on the Crane Creek Farm near Cando, Saskatchewan. She rode a horse bareback three and a half miles to a one-room school until Grade 8, received some of her high school education by correspondence, and completed high school while living with her sister, Daisy, in Aberdeen, Saskatchewan. It was here that she met her lifelong friend, Eleanor Smith, who eventually was Marion’s maid of honour at her wedding. After high school, Marion moved to Saskatoon to live with her parents and attend Normal School (Teachers College). Upon graduation, she taught first at Blucher then Dundurn, Saskatchewan. During that time, Marion was introduced to a young man who was a friend of her brother, Fred. Sparks flew and Marion and Bill were married only a few months later on July 30th, 1949. Marion and Bill lived in Saskatoon until 1972 when they moved to Edmonton. In 1973, a business opportunity beckoned and they moved to Medicine Hat where they continued to reside until her passing. Marion was a forward-looking person, building strong ties with family and many friends throughout the years. She and Bill loved travelling all over the world as long as they weren’t away from the grandchildren for too long. Marion enjoyed flower gardening, needlepoint, knitting, cooking family meals, keeping up on current events, and especially playing cards. Her grandchildren and great grandchildren were the lights of her life and she was always excited to see them and to hear of their latest accomplishments. She spent her last five years at Chinook Village where she had several very special friends among residents and staff. Her playful sense of humour was always there, even through the pain of her last days. Marion will be greatly missed and lovingly remembered by all. The Funeral Service will be held in the TERRACE ROOM at CHINOOK VILLAGE, 2801 – 13th Avenue SE, on Tuesday, October 25th, 2016 at 11:00 a.m. with Pastor Lance Duncalfe officiating. A Private Interment will take place at Saamis Prairie View Cemetery. Memorial gifts in Marion’s memory may be made to the Community Foundation of Medicine Hat and Southeastern Alberta, #104, 430 – 6th Avenue SE, Medicine Hat, Alberta, T1A 2S8. Condolences may be sent through www.saamis.com or to condolences@saamis.com subject heading Marion Bauman. Funeral arrangements are entrusted to