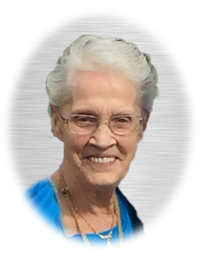 Frances Bertha Kuntz a longtime resident of Redcliff, Alberta, passed away on Saturday, October 22nd, 2016 at the George Boyak Care Facility in Calgary, at the age of 80 years. Frances was born on May 13th, 1936 in Maple Creek, Saskatchewan to Christian and Emelia Wandler where she then met and married Joseph Kuntz in 1952. They moved from the family farm to Medicine Hat in 1960, then to Redcliff where they continued to raise their four children. Frances was predeceased by Joe on September 4th, 2010, after 48 years of marriage. She is survived by her children, Randy Kuntz (Barb Forelich), Stan (Karen) Kuntz, Terry Kuntz (Patty Green) and Cory (Jay) Fiset; four grandchildren, Maria St. Pierre, Melissa Kuntz (Tyler Mayo), Wyatt Fiset andJaxson Fiset; and three great grandchildren, Kaidan, Ava and Raya St. Pierre. Frances will be sadly missed by all who loved her including dear friends of Redcliff and her extended family, one sister and numerous nieces and nephews. Vigil Rites (Prayers) will be held at SAAMIS MEMORIAL FUNERAL CHAPEL, 1 Dunmore Road SE. on Tuesday, November 1st, 2016 at 7:00 p.m. The Funeral Mass will be celebrated at ST. PATRICK’S ROMAN CATHOLIC CHURCH, 238 – 2nd Avenue NE, on Wednesday, November 2nd, 2016 at 10:30 a.m. with Father Tomy Manjaly, Celebrant. A private interment will take place at Redcliff Cemetery. Memorial gifts in Frances’s memory may be made to the Alzheimer Society, 201, 770 – 6th Street SW, Medicine Hat, AB T1A 4J6. Condolences may be sent through www.saamis.com or to condolences@saamis.com subject heading Frances. Funeral arrangements are entrusted to
SAAMIS MEMORIAL FUNERAL CHAPEL CREMATORIUM & RECEPTION CENTRE, “The Chapel in the Park”, locally owned and directed. Should you wish any additional information, please telephone (403)528-2599