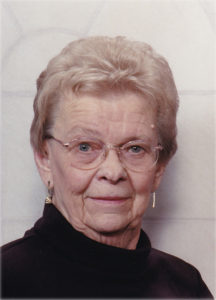 Mrs. Luella Hazel Emms, beloved wife of the late Sidney Emms, passed away at the Riverview Care Centre in Medicine Hat on Thursday, October 27, 2016, at the age of 92 years. Luella was born at the family home, south of Hazenmore, Saskatchewan on September 29, 1924, to John and Minnie Sabo. She was one of 10 children including three brothers and six sisters. Luella is survived by her five children: Diane (Walter) Myslicki, Mel (Karen) Emms, Glen Emms, Lynn (Garnet) MacNevin, Les (Debbie) Emms as well as numerous grandchildren and great-grandchildren. She is also survived by three sisters: Florence Cowie, Joyce Fehr and Elaine (Mel) Cupples as well as many nieces and nephews. Luella was predeceased by her husband, Sidney and daughter-in- law, Fay Emms. A Memorial Service celebrating Luella’s life will be held on Saturday, November 19, 2016, in Mankota, Saskatchewan. (Condolences may be expressed by visiting our website at www.cooksouthland.com) Honoured to serve the family is