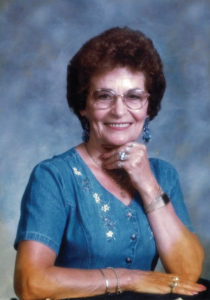 Rose Katherine Risling (nee Wangler), wife of Lambert Risling, passed away on Friday, October 28, 2016, at the age of 83 years. She also leaves to cherish her memory one daughter, Gail (Bob) Graham; and one son, Kelly (Leslie); four grandchildren, Bobby (Erica) Graham, Brock (Lucia) Graham, Braden (Vivian) Graham and Kelsie (Cory) Goddu; five great grandchildren, Gracie, Fred, Elena, Silvana, and Braden Jr.; one sister, Bernice Humel; two brothers, Fred (Jenny) Wangler, and Eddie (special friend, Marg) Wangler; as well as numerous nieces and nephews. She was predeceased by her parents, Gabe and Clara Wangler; her in-laws, Jacob and Elizabeth Risling; sister, Joan (Moose) Hauck; and great grandson, James Louis Graham. Rose was born in Freemont, Saskatchewan, August 26, 1933, and was raised and schooled in Wilkie, Saskatchewan. She married Lambert in Wilkie on November 28, 1950, and at the time of her passing they had been married exactly one month shy of 66 years. In 1956, along with their 5-year-old daughter and newly born son, they moved to Medicine Hat, then to Redcliff in 1963, and finally back to the Hat in 1994. Rose was employed at Redcliff Greenhouses for 3 years, and managed the candy section at Woolworths department store in Medicine Hat for 20 years, where she was affectionately known to many as the “candy lady.” Rose exemplified service, be it the elderly she frequently visited in nursing homes, the Catholic Women’s League, which she was a member of for over 40 years, or her persistent efforts to meet the needs of her own children and grandchildren. She was an elegant, dignified and selfless woman whose caring and compassion touched countless lives. The family would like to thank all those who cared for Rose at the Good Samaritan Society. Vigil Rites (Prayers) will be held at SAAMIS MEMORIAL FUNERAL CHAPEL, 1 Dunmore Road SE, on Wednesday, November 2, 2016 at 7:00 p.m. The Funeral Mass will be celebrated at ST. PATRICK’S ROMAN CATHOLIC CHURCH, 238 – 2 Avenue NE, on Thursday, November 3, 2016 at 10:30 a.m. with Father Tomy Manjaly, Celebrant. Memorial gifts in Rose’s memory may be made to the Alzheimer Society, 201, 770 – 6 Street SW, Medicine Hat, Alberta, T1A 4J6. Condolences may be sent through www.saamis.com or to condolences@saamis.com subject heading Rose. Funeral arrangements are entrusted to