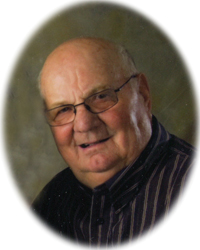 Donald (Don) Anhorn formerly of Hilda, AB beloved husband of Flora (Flo) passed away peacefully on October 31, 2016, at the age of 83. He leaves to cherish his memory his 3 daughters, Valerie (Jeffrey) Wickenheiser of Dunmore, AB, Donna (Brian) Maier and Brenda (Allan) Beierbach both of Richmound SK. Also his grandchildren Byron (Andrea) Wickenheiser and their children Zac and Chase, Brayden (Melissa) Wickenheiser, Kelly (Lindsey) Maier and their daughter Ivy, Kirby (Jeff) McLaren and their children, Cadence, Cohen and Cooper, Amanda (Scott) Frerichs and their son Tripp, and Shauna Beierbach. He is also survived by his sister Lorraine (Tom) Young of Calgary and Stella (George) Gray of Fairmont Hot Springs BC. He was predeceased by his parents, John and Tillie Anhorn, two sisters, Helen Stearns and an infant sister Florence.

Don was born May 16, 1933 in Medicine Hat and raised on the family farm near Hilda. He attended school in Hilda and in 1959 he married his lifelong companion Flora Rogers. Don owned and operated the Imperial Oil agency in Hilda for 34 years. He enjoyed many years of playing baseball and softball for the Hilda Cubs, twilight baseball with the Stylerite Yankees in Medicine Hat, and later for the Hilda Bears, slowpitch. In 2011 he was awarded the Grant Ehnisz Memorial trophy for outstanding dedication and sportsmanship in the Sask Alta Baseball league. He was the Hilda Volunteer Fire Chief for numerous years, and was a dedicated volunteer for the Hilda Community Association and several homecoming committees. Don and Flo owned a townhouse in Sparwood, BC where some great family memories were made, as well as many friendships.

In 2010 Don and Flo retired to Medicine Hat, but from then until present, many trips to Hilda were made to “check” things or to work in the shop. Don loved spending time with the grandchildren and later the great grandchildren. He especially valued their visits as his health declined. Those wishing to pay their respects may do so at Saamis Memorial Funeral Chapel,1 Dunmore Road SE, on Thursday from 7:00 pm to 9:00 pm, and at Medicine Hat Exhibition and Stampede Grounds, Cypress Centre Auditorium on Friday, from 9:30 am to 10:25 am. The Funeral Service will be held at Medicine Hat Exhibition and Stampede Grounds, Cypress Center Auditorium on Friday November 4th, 2016 at 10:30 am with Pastor Shane Andrus and Pastor Emil Krause co-officiating. A private interment will take place. Memorial gifts in Don’s memory may be made to the Children’s Wish Foundation, 39 Somerset Dale SE, Medicine Hat, AB T1B 0G9, or charity of one’s choice. Condolences may be sent through www.saamis.com or to condolences@saamis.com subject heading Donald Anhorn. Funeral arrangements are entrusted to