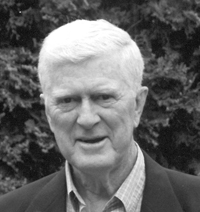 David S. Woodruff (Woody) passed away peacefully in his sleep in his home at Overlander Extended Care Hospital on November 4 2016 aged 82 years. Survived by his daughters, Marilee (Greg) Hermiston, Marci (Alan) Henderson, his grandsons, Jordan Hermiston, Daren (Lexi) Hermiston and Corey (Brooke Dennill) Hermiston. Sisters Elnor (Finlay) McNaughton, Cheryl (Ralph) Wilkey, sister-in-law Doris Woodruff and many wonderful nieces and nephews, family and friends. Pre-deceased by his wife Joyce, his father Merrill Woodruff, his mother and step-father Bernice and Walter Brown and his brother Emerson Woodruff and his sister-in-law Phyllis Bader. Woody was born in Medicine Hat Alberta on March 17, 1934. He joined the Royal Canadian Navy in 1954 and served in the regular forces for 34 years and the reserve forces for five years before his retirement. He was a lifelong hockey player and golfer. He and Joyce were married in June of 1956 and settled in Victoria where they raised their daughters. They retired to Vernon and then Kamloops and enjoyed a wonderful retirement with their daughters, son-in-laws and grandsons. A celebration of life will be held at a later date. In lieu of flowers, donations may be made to Overlander Extended Care Hospital Auxiliary in Woody’s name. The family would like to extend our deepest thanks, appreciation and love to the angels at Overlander, Blueberry Lane who took such wonderful care of our father and papa for the last year and a half. Condolences may be expressed at www.schoeningfuneralservice.com

One Condolence for “WOODRUFF”