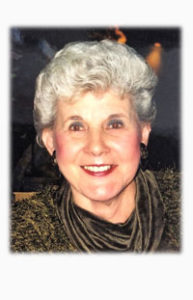 1928 – 2016
The family of Lubina (Bev) Crockford announces the passing of their mother, grandmother and great-grandmother at the Medicine Hat Regional Hospital on Tuesday, November 1, 2016, at the age of 88 years. Mom was living at Meadowlands Retirement Community at the time of her passing. She was born on July 20, 1928 in Sosnica, Poland to Harry and Pearl Szostaczko. The family, including brother, Nick and sister, Sally immigrated to Canada in 1935, settling in Beverley, Saskatchewan. Wanting to fit in with the Canadian kids, she adopted the name Bev. Bev worked at the Redcliff Glass Factory during heR teenage years. It was at this time she met her life partner, Rod Crockford. She married Rod on August 16, 1947. They moved into their home at 52 – 10 Street S.W. and lived there for 58 years until the time of dad’s passing in 2005. Their three children were raised in this home. She also worked at the Medicine Hat News as a proofreader and at the jewelry counter at Eaton’s (Hence her obsession with jewelry). She also worked at the Royal Canadian Legion with Rod. She was an excellent baker. Her tarts, butterhorns and apple pies were popular with her family. In their retirement years they enjoyed camping out at Elkwater, square dancing and playing golf. Bev is survived by her sister, Betty Elsbett of Dutchess, AB; three children: Sandra (Nolan) Fisher of White Rock, B.C.; Sheryl (Russ Golonowski) Lyons of Medicine Hat, AB; Rod (Gina) Crockford of Calgary, AB. She is also survived by six grandchildren: Jason (Leanna) Fisher, Heath (Cara) Matthews, Jennifer (Norm) Raitt, Lyndzie (Luc) Reaume, Jordan (Val) Mathews and Jillian Crockford; nine great-grandchildren: Drayden Perner-Matthews, Fox Matthews, Cassandra Fisher, Sydney Matthews, Cameron Fisher, twins Jordan and Teagan Fisher and twins Nolan and Griffin Raitt. A Celebration of Bev’s life will be held at Cook Southland Funeral Chapel, 901 – 13 Street S.W., Medicine Hat on November 14, 2016, at 11:00 a.m. with Major Murray Jaster officiating. Interment will follow at Hillside Cemetery with a reception thereafter in the Cook Southland Reception Facility. (Condolences may be expressed by visiting our website at www.cooksouthland.com) Memorial donations in Bev’s name may be made directly to the Royal Canadian Legion Poppy Fund, 702 – 2nd Street S.E., Medicine Hat, Alberta, T1A 0E1. Honoured to serve the family is Cook Southland Funeral Chapel, 901 – 13th Street S.W. Medicine Hat, Alberta T1A 4V4 Phone 403-527-6455

One Condolence for “BEV CROCKFORD”