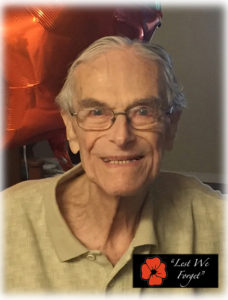 The family of Mr. William ‘Bill’ Arthur Coleman, beloved husband of Mrs. Patricia Coleman, sadly announce his passing at the Medicine Hat Regional Hospital on Tuesday, November 8, 2016, at the age of 95 years. Bill was born on August 2, 1921, in Woolwich, London, England. He spent his childhood days in England and Darjeeling, India. Bill served with the British Army from 1940 – 1945. He immigrated to Canada in 1957, where he had various jobs before being employed with the Medicine Hat Regional Hospital, working his way up to the Director of Laundry Services until his retirement in 1982. Bill was involved with the Barbershop choir and participated in several musical theatre productions. During retirement, he enjoyed cycling, tennis, woodworking, volunteering at the hospital, Circle K Kiwanis, gardening and was a Medicine Hat Tiger season ticket holder for over 30 years. Bill will be lovingly remembered in the hearts of his wife of 62 years, Patricia; son, David and daughter, Jenine (Mark) Scheuerman, both of Medicine Hat; two grandsons, Cole Scheuerman (Michelle Hall) of Melbourne, Australia and Scott (Jenny) Scheuerman of Singapore as well as two great-grandsons, Shannon and Julian Scheuerman of Singapore. The family invites friends to join them for an Open House at Bill and Pat’s residence at the Wellington, 422 – 1595 Southview Drive S.E., Medicine Hat, on Saturday, November 19, 2016, from 2:00 p.m. until 4:00 p.m. If friends so desire, memorial tributes may be made in Bill’s name directly to the Canadian Cancer Society, 102 Crestwood Square One, 1865 Dunmore Road S.E., Medicine Hat, AB., T1A 1Z8. (Condolences may be expressed by visiting our website at www.cooksouthland.com) Honoured to serve the family is