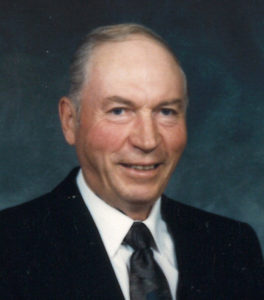 The Funeral Mass will be celebrated at St. Michael’s Catholic Church, 1113 – 1 Street East, Bow Island on Friday, November 18, 2016 at 1:30 P.M. A private burial to follow at the Bow Island Cemetery. Condolences may be forwarded by visiting our website at www.southlandfuneral.com.

He was predeceased by his parents O’Renzel and Doris Evans; father and mother-in-law Ralph and Kate Schlachter and sister-in-law Helen Schlachter.

Gordon was born in Raymond on October 23, 1926 to O’Renzel and Doris Evans. He farmed in the Winnifred area. Gordon enjoyed holidays in the United States as well he had a passion for shiny black lincolns. He was also a member of the Knights of Columbus for many years. He will be lovingly remembered.

One Condolence for “GORDON EVANS”