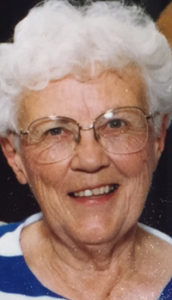 Mrs. Pat Geldreich of Bow Island, beloved wife of the late Mr. Ray Geldreich, passed away at the Bow Island Care Centre on Wednesday, November 16, 2016 at the age of 98 years.

Alberta Patricia (Metheral) Geldreich was born on July 6, 1918. She was named for the province to which her parents, Norman and Ruth Metheral, had recently migrated; and for the Princess Patricia Light Infantry Unit her uncle was fighting with in the first World War.

Born in the hospital in Foremost where her mother had been a nurse, Pat – like so many children of that era – learned at an early age to assume responsibility in helping out around the home and ranch, and in caring for her younger siblings, Lou and Jack. Pat started school in Foremost when her family moved from the ranch into town, but at an early age started boarding in Medicine Hat to complete high school. She attended Normal School in Calgary and her first teaching position was in a one-room school on the “Bench” in Cypress Hills.

Pat’s childhood instilled the characteristics that would define her life: an undying work ethic, a commitment to achieving the highest standards she could set for herself, a fearlessness in overcoming obstacles placed in front of her…and a selflessness that always placed her family and friends first. The hundreds of students she taught over her long career could probably attest to this. She loved being reminded by former students that she was “tough but fair.”

In 1943, Pat found her perfect complement and partner when she married Ray Geldreich, a farmer from Bow Island who was serving in the R.C.A.F. Pat and Ray settled in Foremost where they raised their two children, Diane and David. In 1955, Pat resumed her teaching career in both Foremost and Bow Island and enjoyed completing her Bachelor of Education degree at the University of Lethbridge in the 1970s.

When their son purchased the farm in 1980, Pat and Ray moved back to Foremost where they enjoyed over 25 years of wonderful retirement. Their large lot enabled Ray to ‘farm’ his huge garden, and Pat to grow her spectacular roses and giant pumpkins for the Library fundraising festival. They took great pleasure from their young grandchildren and continued to be completely involved with family and the community.

Pat probably gained the most satisfaction from the part she played in the following projects: the writing and editing of “Shortgrass Country”, the establishment of the Shortgrass Regional Library System, and the fundraising for and creation of the Foremost Library.

After Ray’s death in 2007, Pat relocated to Pleasant View Lodge in Bow Island where she resided until recently moving to Extended Care at the Bow Island Hospital. She passed away there the evening of November 16.

Pat is survived by her children Diane Stephen and David (Wendy, with whom she had a special bond) Geldreich; grandchildren Douglas, Susan and Mark (Diana) Stephen; Raymond and Linden Geldreich; great-grandchildren Connor and Liam Stephen; and numerous nieces and nephews.

In accordance with Pat’s wishes, there will be a private celebration of her life with immediate family.

One Condolence for “ALBERTA PATRICIA GELDREICH”