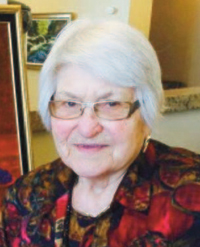 She was predeceased by two sons, Wesley and Ricky. Parents Johann and Elisa Krasson and brother Alfred.

Born in Reschkanofka, Bessarairen Hedy lived in various countries and a mixture of cultures. She lived through bandit attacks, planes, explosives and gunfire. She learnt survival tactics and the use of gas masks. Canada to her was the land of plenty. In 1952, she boarded a ship to Halifax, rode the train West to Leader, SK. She began her employment at the old hospital. She met the love of her life, Ray. They married on June 25, 1953.

They made their life on the family farm at Burstall, SK. Hedy worked hard in the fields, had her vegetable and flower gardens, butchered chickens, milked cows and sold Avon to supplement the family income. She enjoyed hosting students and travellers from around the world at the Tiger Lily Vacation Farm. She made the best Kuchen and donuts. She raised a beautiful family with her love and support.

She pursued her passion of the Arts and cultures throughout her life. She loved painting, hand-formed pottery and writing. She was a member of the Medicine Hat Pottery and Writers Clubs. She won many awards and recognitions. Hedy and Ray enjoyed retirement travelling in their RV, bus tours, cruises and trips to her homeland of Germany.

Hedy and Ray moved to Saskatoon in 2014 to be closer to Grace. They were welcomed into the assisted living community. They enjoyed their independence and new friends. Their outings to the theatre, river cruises and German Club brought them pure enjoyment. Hedy lived a very full life—a life well-lived is a precious gift.

Service will be held at Hillcrest Church in Medicine Hat Saturday, November 26, 2016 at 1:00 PM with Rev. George Brandt officiating. In lieu of flowers, donations in Hedy’s memory can be made to Creative Kids Saskatoon online at http:www.creatvekidssask.ca or mailed to Creative Kids Saskatchewan 404-2125 11th Avenue, Regina, SK S4P 3X3.