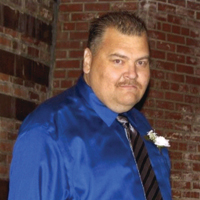 Kelvin Charles Meier of Medicine Hat, passed away on Tuesday, November 22nd, 2016 at the age of 49 years. Kelvin leaves to cherish his memory three daughters, Brittney (Cody) Weiss, Laura Meier and Chelsea Sulz; his father, Charles Meier; his mother, Peggy Crouch; one grandson, Cooper Weiss; one step-granddaughter, Jayla Weiss; his grandma, Theresia Gertner; his beloved canine companion, Minnie Mouse; as well as numerous aunts and uncles. Kelvin was predeceased by his grandparents, Veronica and Joseph Meier; and his grandpa, Philip Gertner. Kelvin, also known as Hightower, was born on February 15th, 1967 in Medicine Hat. He enjoyed fishing and spending his mornings at Tim Horton’s. He was on dialysis for over 10 years. Kelvin was a proud grandpa and was so proud to walk his first daughter down the aisle at her wedding. Those wishing to pay their respects may do so at SAAMIS MEMORIAL FUNERAL CHAPEL, 1 Dunmore Road SE, on Saturday, November 26th, 2016 from 1:00 p.m. until 4:00 p.m. A reception will follow at the Royal Canadian Legion, Canteen, from 3:00 p.m. until 5:30 p.m. Condolences may be sent through www.saamis.com or to condolences@saamis.com subject heading Kelvin Meier. Funeral arrangements are entrusted to SAAMIS MEMORIAL FUNERAL CHAPEL CREMATORIUM & RECEPTION CENTRE, “The Chapel in the Park” #1 Dunmore Road SE, Medicine Hat, AB T1A 1Z5 (403)528-2599 www.saamis.com inquiry@saamis.com Locally owned and directed CGR Holdings Ltd.