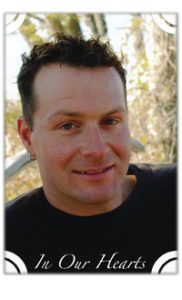 1979 ~ 2016
It is with deep regret that the family of Jason Leismeister announce his passing in Medicine Hat on Monday, November 14, 2016, at the age of 36 years. Jason was born November 27, 1979 in Medicine Hat where he resided his entire life. As a young man, he gained employment with Lawrence Meier Trucking (LMT) and was a dedicated, loyal employee for 18 years. He was a hard worker who always took pride in what he did. Jason worked his way from the ground up and as he advanced and became foreman, and later superintendant of operations, he maintained an excellent rapport with his colleagues. When he wasn’t working he loved working out, listening to rap music and everything and anything to do with hockey! He especially loved watching his son, Dre play, and socializing with the hockey parents. Jason was a strong man with a soft heart and an amazing dad! He loved spending time with his friends and family but most of all he loved spending time with his son, Dre. They had a special trip to Australia in 2014, where during their trip, they went to an Eminem concert, made many memories and most importantly bonded as father and son. Jason’s memory will live on in the hearts of his family including his son, whom he was so proud of, Dre; parents, Melvin (Peggy) Leismeister and Wendy (deceased) (Lorne Lehman; brother, Mike Moore (Kara) and neice, Kennedy; step-sister, Rose (George) Day and step-brother, Clayton Gobeil; two special friends, Nikki Bryant and Leanne Jacobs as well as numerous aunts, uncles, neices, nephews, cousins and extended family. Jason was predeceased by his mother, Wendy Lehman and grandparents, Dean (June) Moore and Jack (Lily) Leismeister. Jason’s life will be celebrated at Cook Southland Funeral Chapel, 901 – 13 Street S.W., Medicine Hat on November 26, 2016, at 11:00 a.m. with Major Murray Jaster officiating. Private columbarium placement will follow. (Condolences may be expressed by visiting our website at www.cooksouthland.com) Memorial donations in Jason’s name may be made directly to the Canadian Mental Health Association, 204, 1865 Dunmore Road, S.E., Medicine Hat, Alberta, T1A 1Z8. Honoured to serve the family is Cook Southland Funeral Chapel, 901 – 13th Street S.W. Medicine Hat, Alberta T1A 4V4 Phone 403-527-6455