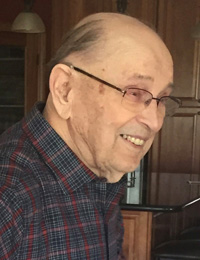 Edward Biffart, beloved husband of Louise Biffart, passed away Thursday, November 24, 2016 at the age of 96 years at home in his caring retirement community of Masterpiece. Edward also leaves to cherish his memory a daughter, Sharon Martens (Rod) of Calgary; and a son, Darwin (Wanda) Biffart; four grandchildren, Travis (Mandy) Martens of Langley, BC, Rachael (Rodney) Hinz of Calgary, Trent (Lise) Martens of Calgary, Jessica (Aaron) Dewarle of Gabriola, BC; six great grandchildren, Kierra, Kyla, Ella, Spencer, Leo and Seb. Edward was born in Woodrow, Saskatchewan on November 25, 1919. He married Louise Fauser on October 20, 1943. He was predeceased by his parents, Karl and Christina Biffart; and siblings Sam, Charles, Charlotte, Anna, Bertha, Albert and Ruben. Edward loved the farm where he earned his living, choral music which he enjoyed conducting in church and for Hillcrest Christian College, travelling by motorhome, fishing, golfing and boating. He showed his great sense of humour while he engaged with friends, family and those who cared for him. Family and friends who wish to pay their respects may do so at SAAMIS MEMORIAL FUNERAL CHAPEL, 1 Dunmore Road SE on Monday evening from 7:00 until 9:00 p.m. The Funeral Service will be held at CRESTWOOD MENNONITE BRETHREN CHURCH, 2348 Dunmore Road SE, on Tuesday, November 29, 2016 at 2:00 p.m. A reception and luncheon will follow at 3:30 p.m. in the Terrace Room at Chinook Village, 2801 – 13 Avenue SE. A private interment will take place at Hillside Cemetery. Memorial gifts in Ed’s memory may be made to the Heart and Stroke Foundation of Canada, 124, 430 – 6th Avenue SE, Medicine Hat, Alberta, T1A 2S8. Condolences may be sent through www.saamis.com or to condolences@saamis.com subject heading Edward Biffart. Funeral arrangements are entrusted to