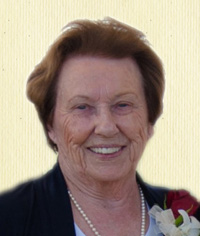 Jean Thomson, beloved wife of Thomas “Tom” Thomson of Medicine Hat, passed away on Wednesday, November 23rd, 2016 at the age of 89 years. Jean also leaves to cherish her memory one son, David (Valarie) Thomson; one son-in-law, Dan Rigby; three grandchildren, Eric (Andrea) Thomson, Adam (Victoria) Thomson and Ian Rigby; three great-grandchildren, Charlotte, Allister and Bridgette. Jean was predeceased by her parents Jack and Joan Mcleod and daughter, Donna Rigby. Jean was born in Winnipeg, Manitoba on April 3rd, 1927. Jean’s mother passed away at Jeans birth and as a result, Jean was raised by her father, grandparents, aunts and stepmother. She was educated in both Winnipeg, Manitoba, and Kenora, Ontario. At the age of 16, Jean began work in the offices of Ashdown Hardware. On June 18th of 1947, Jean married Tom Thomson. They moved to Calgary in October of 1949, and then relocated to Medicine Hat in April of 1954. Jean enjoyed sewing and knitting. She was an avid curler and golfer. Jean enjoyed to travel around the world, especially to Scotland, to search out her family history in the Isle of Skye. The family invites you to attend a reception in Jean’s honour at the Paradise Valley Par 3 Golf Club, 90 Gehring Rd SW, Medicine Hat, at 3 p.m., Tuesday, November 29, 2016. A private Interment will take place at Saamis Prairie View Cemetery. Memorial gifts may be made to the Medicine Hat & District Health Foundation, 666 – 5th Street SW, Medicine Hat, Alberta, T1A 4H6. Condolences may be sent through www.saamis.com or to condolences@saamis.com subject heading Jean Thomson. Further funeral arrangements are entrusted to