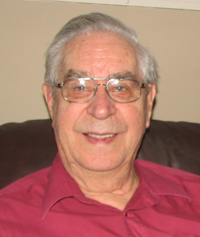 Dad grew up in a very loving Christian home with two older brothers, Harry and Edwin and a younger sister, Isabelle. He married Edna Schneider on March 5th, 1944 and took over the family farm in the Concordia District, raising his family of one son, Stan and one daughter, Arlene.

He was an honest, hardworking man. Times were tough, but he gave his family the important things in life; values and guidance. He raised us with loving discipline and strict rules but he was wise and knew what was best for us.

Music was a big part of the family and extended to uncles, aunts and cousins. Aunt Isabelle accompanied the quartet: dad, his brothers and great uncle Emil Mayer. They sang in churches around the country. Dad was involved with different people, playing for dances, with Bill Boschee, Vic Scharff, Leslie Herman and Glen Lust. He sang in the Chinook Men’s Choir under the direction of George Weins. He also attended monthly hymn sings at Southview Church of God.

Dad loved baseball. He played with the Elkwater team and then later coached the Irvine Mercuries team which Stan was a team player.

In 1963, he sold the farm and started to build a house in Elkwater, with the help of Herb Mayer and Isaac Meier. His work ethic caught the eye of Park Manager, Andy Salus and was offered a job. He started work with the Provincial Parks in the Spring of 1964. He was committed to this job and never took a sick day. Mom and Dad became very good friends with Andy and Helen, Jeanine Varty, park secretary and motel owners, Ed and Mary Fikowski. He achieved his carpenter journeyman’s certificate.

In 1975, he became Reginal Maintenance Manager at Rimbey, Alberta. The job was very stressful, so they moved back to the house in Medicine Hat that they purchased as their retirement home before they left. Allen and Val Schattle were excellent renters for the 2 years they were gone. Dad started bussing for Dave Kusler and brought kids from Schuler to Medicine Hat High School. Then Schlenker Auction asked him to work for them. Jim was a great friend and he was a cashier alongside Diane, who became like a daughter to him. The seasonal farm auction trips were far, the days long, but he loved it. It was the people more than anything that kept him with Schlenker Auction for 18 years.

Dad became involved in 1961 with building a curling rink in Elkwater. His legacy lived on in Stan’s competitive career and later in Darla and Noella’s curling adventures. He watched all of us curl and followed along to cheer and support no matter where the competitions took them. Dad curled for years, but when his knees wouldn’t cooperate anymore, he retired. He refused to try the stick. He bowled and loved to dance, but his knees again didn’t cooperate. Mom and Dad enjoyed playing cards, Yahtzee and Aggravation (marbles) with many friends.

They sold their house and moved into a condo at Park Meadows. They lived there for 10 years and then in June 2004 moved to congregate living at Chinook Village. Mom passed away in 2008. Dad was nicely settled in Chinook Village, having his needs provided. His neighboring gals often called on him to complete the crib foursome.

Mom and Dad travelled by bus to Alaska, flew to Hawaii, attended the Rose Bowl Parade in Pasadena, saw Disney World and Epcot Center in Florida and did a bus trip to Branson. They took Stan and Leslie, Harry and I to Las Vegas for the NFR Rodeo. Dad loved to travel and we took him on a lengthy trip to Denver, the Grand Canyon and Vegas after mom passed away.

He loved going to the ranch and helping Harry with haying for many years. He willingly gave up his license in 2013 and loved the trips to the farm to see all the bales. He still wanted to help Harry haul them and drive the big truck and trailers.

He loved going to the spa in Moose Jaw and we made many trips there with De Jong Tours. Our last trip there was just in early October and we had supper with Darrell and Sharon. They often came and visited with us all.

We also took him on a Blue Jays bus trip to Seattle along with Jerry and Jean Ziebart in 2011. Our annual Christmas present to Dad was season passes to the Medicine Hat Maverick’s games over several years but last season decided he’d sooner watch the Blue Jays from the recliner in his air-conditioned suite.

Dad was a man of integrity; his word was as good as a signed contract and his reliability was never failing. If he said he was going to do something, he did it.

Dad and the family were very fortunate to have a special lady that became a dear friend to us all. Thank you, Elsie, for all the time you shared with Dad, the A&W burgers, breakfasts and crib games. The weekly coffee days at the Co-op were special.

Dad faced many challenges with his health in the last 5 years. But through all the surgeries and cancer treatments, he always bounced back. People always commented on how well he looked and how he hasn’t changed in years. But lately he’d say “sometimes I look better than I feel.”

We want to thank Dr. Alphin, Dr. Duke and Dr. Meiring and all the nurses on 5 West and Palliative Care who were so wonderful, loving and caring. We were so blessed to have shared his life for 92 years. We prayed for little pain and suffering and God answered. He was a very special man, husband, father, grandfather and friend. We will treasure every picture and memory that we have of him.

Rest peacefully in the arms of Jesus. Love You.

Those wishing to pay their respects may do so at SAAMIS MEMORIAL FUNERAL CHAPEL, 1 Dunmore Road SE, on Friday from 7:00 until 9:00 p.m. The Funeral Service will be held at SAAMIS MEMORIAL FUNERAL CHAPEL, on Saturday, December 3rd, 2016 at 10:30 a.m. with Pastor George Brandt and Pastor Lance Duncalfe co-officiating. A private interment will take place at Saamis Prairie View Cemetery. Memorial gifts in Norman’s memory may be made to the Margery E. Yuill Cancer Centre, c/o Medicine Hat and District Health Foundation, 666 – 5th Street SW, Medicine Hat, Alberta, T1A 4H6. Condolences may be sent through www.saamis.com or to condolences@saamis.com subject heading Norman Gill. Funeral arrangements are entrusted to

Leave a Condolence for Dixie Kusler-Larocque