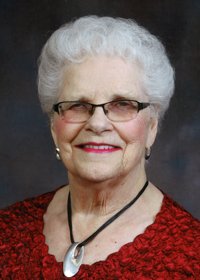 Dorothy Anne Bien of Medicine Hat, beloved wife of the late Anton “Tony” Bien, passed away on Monday, November 28th, 2016 at the age of 83 years. Dorothy touched so many lives with her warm smile, kind heart, and helping hands. She leaves to cherish her memory her children, Michelle Bien and Bruce Bien, both of Medicine Hat; four grandchildren, Cassia Eichelbaum, Kara Broste (Cal Drader), both of Medicine Hat, Erik Broste of Nelson, British Columbia and Curtis Bien of Red Deer; four great grandchildren, Kalia, Gaetana and Anton Eichelbaum and Bella Bien; one sister, Rosemary (Gary) Woods; one sister-in-law Rose Bien and one brother-in-law Bill Bien as well as numerous nieces and nephews. Dorothy was predeceased by her husband, Tony Bien; her parents, James and Mary Starr; and dear friend and companion, Paul Hannah. Dorothy was born on September 13th, 1933 in Vanguard, Saskatchewan where she started her schooling. She then moved to Vancouver and Toronto for 11 years. Dorothy returned to Vanguard where she met and married Tony Bien on October 2nd, 1952. Together they lived and worked on the family farm until 1994, when they retired to Gravelbourg, Saskatchewan. After Tony’s passing on March 20th, 2000, Dorothy moved to Medicine Hat to be closer to her family. She was a member of Holy Family Parish and a 60 year member of the C.W.L. Dorothy loved following all sports, and was a dedicated fan of the Saskatchewan Roughriders. She made friends wherever she went! But most of all, Dorothy loved being with her extended family. Dorothy will be missed dearly and forever cherished by all those who knew and loved her. Those wishing to pay their respects may do so at SAAMIS MEMORIAL FUNERAL CHAPEL, 1 Dunmore Road SE, on Thursday from 6:00 until 9:00 p.m. Vigil Rites (Prayers) will be held at SAAMIS MEMORIAL FUNERAL CHAPEL, on Thursday, December 1st, 2016 at 7:00 p.m. The Funeral Mass will be celebrated at HOLY FAMILY PARISH, 1451 Strachan Road SE, on Friday, December 2nd, 2016, at 3:00 p.m. with Father Philip Le, Celebrant. An interment will take place in the St. Matthias Cemetery, Hodgeville, Saskatchewan at a later date. Memorial gifts in Dorothy’s memory may be made to the S.P.C.A., 55 Southwest Drive SW, Medicine Hat, Alberta, T1A 8E8. Condolences may be sent through www.saamis.com or to condolences@saamis.com subject heading Dorothy. Funeral arrangements are entrusted to